Astro101: The Signs of the Zodiac

Astro101 is an occasional series touching on the very basics of astronomy. 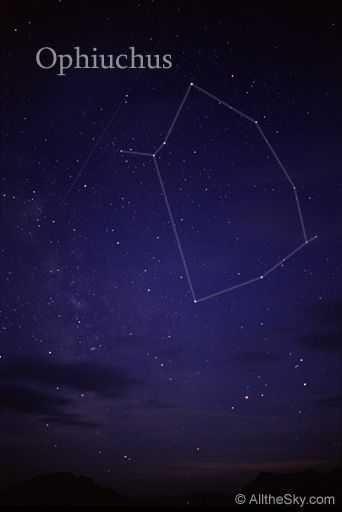 Last week, there was a surprisingly big flurry of astronomical news.  Not over all of the exciting science coming out of the annual meeting of the American Astronomical Society, despite all of the exciting results.  Rather, the kerfuffle erupted over comments that astronomer Parke Kunkle made in an interview with the Minneapolis-St.Paul Star Tribune regarding astrology: namely, that the sun passes through thirteen constellations, not just the twelve, and that the signs of the zodiac don't align with astrological signs.

Kunkle didn't say anything astronomers haven't known since the second century B.C., and astrologers have been making excuses for just as long.  But I'm not here to talk about why astrology is a load of bunk. (If you want to argue otherwise, do a few things before trying to tear me a new one: First, devise and execute a precise scientific study proving astrology and your explanation for how it works, and get your study published in a peer-review journal.  This is something I require of even my best friends before I believe their claims.  Second, go pick up your million dollar prize.  Lastly, come back and laugh in my face.  But not before.)

Instead, let's focus on reality and learn something about the constellations and the zodiac, making use of what some might call a "teachable moment".


1. Constellations
Let's start with the definition of a constellation.  In ancient days, constellations were specific patterns of stars in the sky that made a more-or-less recognizable picture.  Today, these patterns are often called asterisms. A well-known asterism in the northern hemisphere is the Big Dipper (or Plow).  Ancient astronomers defined many different asterisms, but most of these varied from culture to culture.  Also, not every star in the sky was part of a constellation, nor did anyone seem to think that every star had to be.  Many of the patterns we call "constellations" today were used by the ancient Greeks.

The Scientific Revolution, which started in the mid-16th century, began the modern science of astronomy.  One important thing that modern astronomers learned early on was that there are interesting objects all over the sky, and in order to study these objects, astronomers need to make catalogs detailing where each interesting thing is.  The most commonly-used method of cataloging involves a coordinate system on the sky, known as Right Ascension and Declination (akin to longitude and latitude on the Earth).

However, many astronomers also referred to stars as being in constellations.  This didn't mean that a star was part of the pattern, but merely that it was in the same region of the sky as the better-known constellation.  Since the boundaries of constellations were not well-defined, this led to lots of confusion.  So, in the late 19th century and early 20th century, astronomers defined official boundaries to every constellation.  The result is that every portion of the sky belongs to one and only one constellation, even if there are no bright stars in that part of the sky corresponding to some recognizable pattern!  This is analogous to the United States, where every square inch of land belongs to a state, even if nobody lives there.

2. The Ecliptic
As you hopefully know, the Earth orbits around the sun, completing one circuit every year.  Because we are moving, we have a different viewpoint of the sun and sky every day.  In particular, the sun appears to move against the background stars, completing one full trip around our sky in a year.

If you don't believe me, go to the SOHO solar observatory movie page and watch the most recent  LASCO C3 movie.  The SOHO satellite constantly takes pictures of the Sun, and the LASCO is a camera that blocks the sun's bright disk so its faint outer atmosphere can be seen.  In addition to the sun's atmosphere, you'll see tiny white dots moving from left to right across the image.  These are the stars.  Once in a great while, you may even see a pattern of stars that you recognize, like the Pleiades star cluster.  A few months later, you can go out in the early morning and see these same stars high in the sky.

The sun always appears to go past the same stars around the sky every year.  This is because the Earth repeats its orbit every year, and so at the same time every year we have the exact same view of the sun and the stars.  This path is called the ecliptic.    If you could see the sun's path drawn on the night sky, you would see that the ecliptic appears to be a complete circle around the sky, and that this circle goes near or through some familiar star patterns, like Scorpius, Leo, and Gemini.

Although ancient astronomers could not make pictures like the SOHO spacecraft takes, through careful observation they were able to deduce the path of the sun through the stars, and, by definition, the ecliptic.

4. Ophiuchus
The constellation Ophiuchus, the serpent bearer, is an old constellation, but one that most people have not heard of.  It lies north of the constellations Scorpius and Sagittarius.  But one star of the pattern sticks down between the two constellations: theta Ophiuchus.  This star is the right foot of the serpent wrangler.  And the ecliptic (the sun's path through the sky) passes right past this star.

So, the sun's path takes it through part of the constellation Ophiuchus.  Even though astronomers arbitrarily defined constellation boundaries, by any Greek's definition of the boundaries of Ophiuchus, the sun's path must go through the constellation.  Whether or not ancient astronomers realized this, I don't know and don't have time to research.  But having a thirteenth sign of the zodiac would ruin that nice balance between the 12 months of the year and the (roughly) 12 lunar cycles a year, so it's not surprising that Ophiuchus is not considered a sign of the zodiac.

But the fact remains, both by official definitions and by classical definitions of constellation boundaries, the ecliptic passes through 13 constellations.  So, if your astrological sign is "supposed" to be the constellation in which the sun is present when you are born, some people who should be Ophiuchans are left out in the cold.  But astrologers have many (and differing!) "explanations" for why this doesn't matter.

Which brings us to our last point:
5. Precession of the equinoxes
Remember, the sun's path through the sky repeats year after year, so the ecliptic remains the same.  But Earth's axis of rotation, the direction in which the North Pole points, changes over very long time scales.  Every 26,000 years, the Earth's axis makes a big circle in the sky; this motion is called precession of the equinoxes.  If you've ever seen a toy top or gyroscope, you'll have noticed that it wobbles, with its spin axis making circles.  This is basically the same effect as the Earth's precession!

Precession has two major impacts over that long time span.  First, the star we identify as the "north star" changes every thousand years or so.  But more importantly, since Earth's seasons are caused by the Earth's tilt, the seasons slowly change.

If we defined our calendar by the sun's position against the stars, our seasons would slowly get out of sync.  After 13,000 years, our "summer" months would be cold, and the "winter" months would be hot.  This would be confusing.  Therefore, the definition of a "year" that we use for our calendars takes this slow change into account.  Therefore, June will always remain the start of the northern summer, and December the start of the winter.  The effect of Earth's wobble will therefore be seen in the stars.  In 13,000 years, the stars we now see in December will be up in June, and the stars now up in June will be visible in December.  This change is gradual, but noticeable with careful observations.  The first recorded observation of precession was by the ancient Greek astronomer Hipparchus in the 2nd century BC.

The signs of the zodiac that most modern astrologers use were defined by the ancient Greeks, as I've said.  That was about 2200 years ago.  One full circle of the precession of the equinoxes takes 26,000 years.  Take 2200 divided by 26,000, and you get 1/12.  In other words, since the ancient Greeks defined the zodiac, the Earth has completed 1/12 of a precession cycle.  This means that the constellations are about 1/12 of the way through their yearly changes, or that they appear about 1 month out of sync with what the ancient Greeks saw.

But astrologers use definitions of zodiac birth times set by the ancient Greeks, so although a person born in early August may be called a Leo, the sun is actually in the constellation Cancer at the time.  If this bothers you, just stick around another 24,000 years, and things will be back to "normal".

Now you have the full, lengthy story about what Parke Kunkle said in that interview last week. Hopefully you've learned something along the way!

But none of this is news to astronomers.  And, as I've said, astrologers have a wide variety of excuses for why this doesn't matter, and have used these excuses for centuries.  So, perhaps the bigger question is, why did this one news story (not the first to talk about Ophiuchus and the precession of the equinoxes) make such a big impact in the news?  Is it an indictment of how little our society knows about the science of astronomy?  Or should I be optimistic and take it as a sign that society is actually starting to pay attention to what is really happening in the sky?  Given that Americans spend at least as much money on astrology every year as the National Science Foundation spends on astronomy research, I'm not feeling very optimistic.
Posted by Professor Astronomy at 13:14