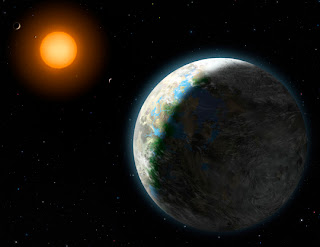 This will be short, as I only have a few minutes to blog.  My students seem to want their homeworks graded for some reason.

Yesterday, astronomers at UC Santa Cruz and the Carnegie Observatories announced that they had found the first known planet that may be habitable.  The press release, available here, does a great job of describing the discovery, the discovery process (it was really hard work), and what we know about the planet.  Alas, many of the news stories that have popped up online and on television do a poor job of all of these, which has led to some very garbled announcements.

In short, though, the planet is about three or four times the mass of the Earth, and it orbits a red dwarf star that has at least five other planets.  The star orbits within what astronomers call the "habitable zone", or a region around the star where liquid water can exist on a planet's surface.

The planet, called Gliese 581g, orbits a red dwarf star called Gliese 581 which is about 20 light-years away from Earth -- very close as far as stars go.  Red dwarfs have less mass then the sun and they don't shine nearly as brightly or as hotly, so this planet is located much closer to its parent star than the Earth is to the sun.  This planet's year is only 37 Earth days long.  Being so close to its parent star also means that the planet is likely tidally-locked, so that the same part of the planet always faces the red dwarf star, just like the same face of the Moon always faces the Earth.  This means that half of the planet always sees daytime, and half always sees nighttime.  The day face of the planet could be really hot, and the night side of the planet could be really cold.  On the border between night and day, the temperature could be really comfortable.

However, we don't know a lot of things about this planet.  It was discovered by its gravitational pull on the red dwarf star, so we haven't actually seen the planet yet.  This is the way that many extrasolar planets have been found, and so we are very confident that the planet exists.  We assume it is made of rock, but we aren't positive about that.  If it is made of rock, it is a little larger than the Earth, and the force of gravity will be a little (but not too much) hotter higher.  If astronauts were to visit this planet, they would be able to stand and walk around.

Likewise, we don't know if there is life on the planet.  We don't even know if the weather is right for life.  All we really do know is that, if we were to magically replace the planet with the Earth, the life on our planet would likely survive.

So, in short, astronomers are discovering more and more small planets around other stars.  This planet could be a lot like Earth, and it could be hospitable for life.  But it also could be very different from Earth, and completely devoid of places where life could exist, let alone life itself.  We still have a long way to go until we can claim to have found a truly Earth-like planet, but this discovery brings us much closer.

There is also a video of the press briefing announcing the planet's discovery.

Stumbling out of the gate

Yes, it has been very quiet on this blog lately.  But, perhaps to your chagrin, I am not gone forever.  I've just been completely swamped with my new teaching responsibilities.

I knew that teaching was hard work, but it is amazing how much time I can put into preparing a class and still feel unprepared.  I'm behind on grading, I need to be preparing exams, and I'm wondering if I am getting anything through to my students.  So, from what I can tell from my colleagues' experiences, I'm having a fairly normal first semester.

I feel for my students, as I've had a few stumbles along the way.  One of the topics I covered in the introductory astronomy class went over like a lead balloon (actually, I think a lead balloon would do better).  At the end of the unit, I found myself asking, "why did I think this was important?", and I can't give a good answer.  So, next time that unit is out, but my current students had to suffer through it.

A couple of weeks ago, I had students measuring angles using their fingers, fists, and hands.  We measured the height of a couple of buildings this way.  It's a time-honored method, and, I thought, fairly simple.  But there were problems in the materials and I hadn't actually done the lab myself, so it went poorly.  In fact, the students nearly revolted.  But this week's lab went much better (I tried it myself first!), so I'm learning.

I've also learned an important lesson, and I think it will prove much more important than which topics I should avoid or which labs I should and shouldn't use.  That lesson is the importance of being confident and projecting that confidence.  In the lectures where I get flustered and let that show, my students pay less attention and don't grasp the material.  In lectures where I exude confidence about my material, I can sense that the students have come along for the ride.  For me, the trick will be to remember to project confidence when, in my opinion, things are going poorly.

In the meantime, I've fallen behind on astronomy news.  I was surprised the other day by the news that Jupiter was at its closest to Earth in 47 years (not by much, but still a cool factoid).  I have a few months of professional journal reading to catch up on.  But I'll get there. Every day, in every way, I'm getting better and better.
Posted by Professor Astronomy at 17:07 No comments:

Email ThisBlogThis!Share to TwitterShare to FacebookShare to Pinterest
Labels: teaching

I've survived my first week as a real astronomy professor this week, but just barely.  Thank goodness for a long weekend.

Two weeks ago, I started my new position as an assistant professor at Texas A&M University - Commerce, a part of the A&M system located about 70 miles northeast of Dallas.  Classes started on Monday, so there was not a lot of time to settle in to my new digs before I started teaching.  My office is a mess.  Half of my belongings are in boxes, and the other half are strewn haphazardly across my desk.

I'm teaching two classes this fall: introductory astronomy and introductory physics for science majors.  The university has a planetarium, which is great for showing demos in class.  But I'm still learning to use it, alternately blinding my class by accidentally turning on the floodlights during a demo and then making them ill by pressing a wrong button and starting the simulated night sky spinning out of control at an alarming rate.  I'm also learning on the fly how to construct cogent lectures.  This learning is occurring by trial and error, primarily error.  On the good side, though, I'm including a lot of interactive material, and the class is quickly warming up to the idea.  Research into astronomy education has found that more interaction and less lecturing increases knowledge retention.

The physics course is also proving challenging.  Here the main problem has been finding a style that fits both my comfort zone and the material.  Our first unit has been on measurement: units (kilograms, meters, and seconds), significant figures, and similar topics.  It's pretty dry, and there are no exciting demonstrations.  I'm also learning how to judge the amount of material I can cover during the class time.  Experience will help a lot.  I hope.

Anyway, astronomy is marching on.  I hope to write about some cool discoveries of the past few weeks over the weekend, in between unpacking moving boxes at home and grading several diagnostic exams.  Have a great Labor Day weekend!

Posted by Professor Astronomy at 17:16 3 comments: