Wednesday was a fairly easy day, at least mentally, at the white dwarf conference I'm attending in Germany.  We only had a short morning of talks, half of which I skipped out on to do some shopping.
In the afternoon, 150 white dwarf astronomers boarded buses for a conference excursion to the Swiss city of Schaffhausen and the Rhein Falls.

Schaffhausen is an old city situated at a strategic point along the Rhein.  Since river traffic could not navigate the Rhein Falls, there was money to be made taking goods out of the river, porting them around the falls, and putting them safely back in the river.  Our tour guide also made plentiful mentions of the different types of bay windows in the city, about which it was hard to get too excited.


I've visited the Rhein Falls before.  The falls are the largest non-alpine falls in Europe.  Last time I visited, in 2003 or 2004, the falls were barely a trickle due to an ongoing drought.  There were also lots of dead fish due to a heat wave which warmed the waters (warm water cannot hold as much oxygen).  This time the water flow was much higher, and the currents much stronger. 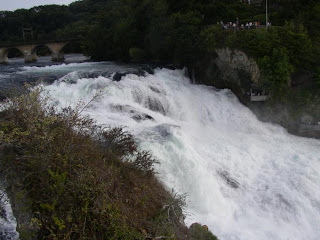 And here is the same view (roughly) yesterday: 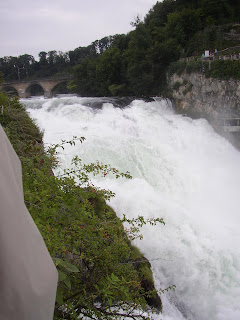 After the tourism, we returned to the town of Schömberg, located on the edge of the Black Forest.  By the time we arrived it was night and we were hungry, so we went straight to a large and very delicious German dinner.  At the dinner, I was reminded yet again of the importance of building interpersonal connections.  We told stories, honored a few of the giants of white dwarf astronomy who were not at the meeting due to health reasons, and got to know new acquaintances. For young astronomers, those connections are crucial as they grow into the field and look for jobs.  Thankfully, most white dwarf astronomers recognize this and go out of their way to bring graduate students to the meeting and introduce them to other colleagues from around the world.

Today, it is back to science.
Posted by Professor Astronomy at 08:34