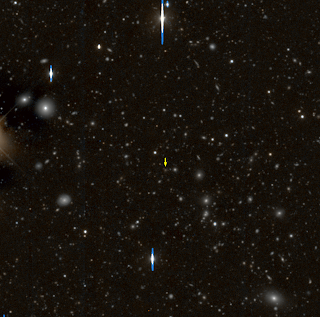 The above picture is the center of our entire photograph (which is WAY too big to post), and is about 5 arcminutes (1/6th of the moon's diameter) across.  The tiny yellow arrow marks the faint galaxy that led us to this patch of the sky.  The galaxy is a gravitational lens, meaning that its gravity bends and focuses the radio waves from a much more distant black hole into a distorted picture of the background black hole.

The faint galaxy, called MG J1131+0456 is about 7 billion light years away.  We don't know how far away the black hole is; it is too faint to study with current telescopes, but some astronomers have guessed it is at least 10 billion light years away.  Here you can see some false-color images of the galaxy and the arc-shaped distorted picture of the black hole taken with the Hubble Space Telescope; our image is not sharp enough to see detail. 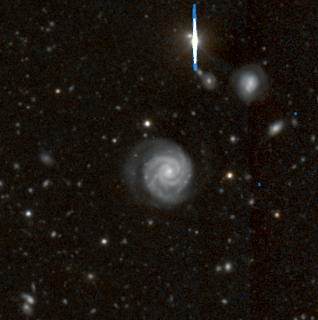 This pretty spiral galaxy just happened to be in the field of view of our camera.  Like many galaxies, it has a name: MCG +01-29-047.  It is located about 450 million light-years away, and it reminds me a little of the nearby spiral galaxy Messier 101.  The brightest galaxy above and to the right of the spiral is related to the spiral -- it's at the same distance.  I think that the spiral's gravity is messing with the companion galaxy, because the companion looks a little odd-shaped and like it may have a shell around it. 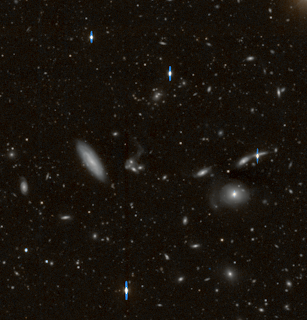 Just to the right of the spiral galaxy is a tight group of at least five galaxies (click on the picture to see a larger version and get a better view).  From the colors I measure, I think this group is a lot further away than the spiral, but I don't know how far away it is -- maybe 1 or 2 billion light years.  But really cool is the wispy tail coming out of the tight group toward the upper right and then making a sharp bend to the left.

That wispy structure is called a tidal tail, and it is made out of stars that used to belong to one of the group galaxies but got tossed out by another galaxy's gravitational pull.   Here's a Hubble picture of a tidal tail being pulled from a galaxy called Arp 188.  Hubble has also imaged a closer tight group of galaxies called Stephan's Quintet; I suspect this tight little group of galaxies is very similar.

To the best of my knowledge, nobody has published a study of this group of galaxies or this tidal tail before!  Alas, I don't have time to do any follow-up work at the moment. 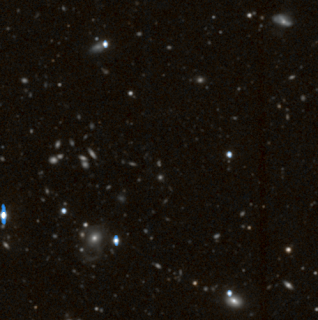 Here is a last bit of the image with two more distorted galaxies.  In the lower left is a galaxy with at least one and probably more faint loops around it, perhaps the remains of small galaxies that got too close to the big one and have been shredded beyond recognition.  The galaxy in the upper right looks a little like a more distant version of the Hubble Arp 188 picture, but without the long tidal tail.   Neither of these galaxies have anything published about them, so I don't know much more!

These four images make up just a tiny fraction of the entire full-moon sized image.   I also spied a cluster of galaxies (which doesn't look that great in this image, but if it were a few billion light-years closer would be very impressive) and many more distorted galaxies.   An astronomer could spend an entire career trying to understand the tiny portion of the Universe in my photograph.  Alas, I don't have more than half an afternoon to give for now.