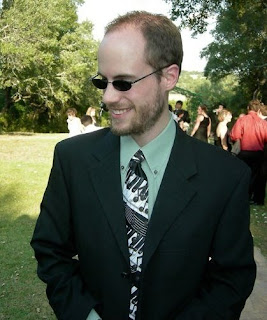 Yesterday saw another graduate student join the ranks of PhD astronomers.  Ian Roederer, a graduate student in the Department of Astronomy at the University of Texas, successfully defended his dissertation.

Dr. Roederer works on metal-poor stars, which are the oldest known stars in the galaxy.  In the Big Bang, the elements hydrogen, helium and the tiniest amounts of lithium and beryllium were created.  Every other element, carbon, oxygen, aluminum, iron, silver, gold,  and so on, has been made in stars since then.  Some of these elements are made by nuclear fusion during a star's life, some are made by supernova explosions, and some by rare nuclear reactions in red giant stars.  Some elements, like iron, can be made in more than one of these processes.  Others can only be made by one process.

As stars are born, live, and die, they produce more and more of these heavier elements.  Those newly produced elements are spewed back into space, where they are recycled into new generations of stars.  It's a lot like pollution: old, smoky stars spew out new chemicals, which then get absorbed by any new stars that come along.  Therefore, young stars tend to have more metal than old stars.  Our sun, which is middle aged at about 4.5 billion years old, has a fairly average amount of metals for younger stars in the Milky Way.

In addition to these rare metal-poor stars, there are other objects in the halo of the galaxy.  Globular star clusters, tight, dense balls of stars, also are in the Milky Way's halo.  The stars in each globular cluster are metal poor, and while the amount of metals vary from cluster to cluster, within each star cluster, all the stars have the same amount of metal (remember this).  Globular clusters are also very old, between 10 billion years old and 13 billion years old.

So, where does this halo come from?  Why are these stars and clusters different than the stars and star clusters in the disk of our galaxy?

This brings us back to Ian and his work.   Many astronomers think that the halo of our galaxy is the result of the Milky Way eating several small galaxies over its lifetime.  When a small galaxy falls past the Milky Way, the Milky Way's gravity can shred it, stretching the small galaxy from a distinct collection of stars into looping streams of stars.  We see this happening around other spiral galaxies; here is a dramatic picture of this process in the spiral galaxy like the Milky Way called NGC 5907. Over time these streams will get stretched out and loop around the galaxy many times and become indistinct, making up a halo of stars whizzing around the Milky Way in every which way.

Ian's studies have included measuring the exact chemical makeup of stars in one suspected stream of stars that, at one point, may have been a tiny galaxy eaten by the Milky Way.  He not only measured the total metal content of the stars, but the ratios of half of the naturally-occurring elements in those stars (46 of 90), including many you may not have heard of (like europium, holmium, and molybdenum).

Ian and his collaborators find that the stars have a range of total metal content, from a high of 3% of the sun's metal content to a low of just four ten-thousandths that of the sun.  This spread means that the stars did not come from a globular cluster, because all the stars in a globular cluster had the same amount of metals.  Ian's team also finds that these stars formed in a place that stopped making stars very quickly.  Since all but the tiniest galaxies can make multiple generations of stars over time, we can be pretty sure that this stream of stars was once its own, very tiny galaxy.  This fits nicely into the picture that the halo of the Milky Way may be made out of alien stars whose parent galaxies were long ago eaten by the Milky Way.

Now that Ian has finished his dissertation, he is moving onward and upward.  This summer, he'll be relocating to Pasadena, California, to take a prestigious fellowship at the Observatories at the Carnegie Institute of Science.  It's an impressive job for an impressive student.  Good luck, Ian!
Posted by Professor Astronomy at 19:26