A wacky set of planets


Today, astronomers from the University of Texas at Austin announced some exciting new findings about a solar system 44 light-years from Earth.  They used the Hubble Space Telescope to study the family of planets around the star upsilon Andromedae, and their results raise the question as to what a "normal" system of planets is.  The answer to this question has important consequences for the search for other Earths and life on other planets.

Let's start by reviewing our own Solar System.  In our Solar System, all eight planets orbit the sun in nearly circular paths, and all of those paths line up with each other and with the sun's equator.  It's easier to describe with drawings.  Here's a schematic of what our Solar System would look like if you were out in space over the sun's north pole and looking down: 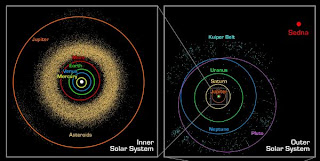 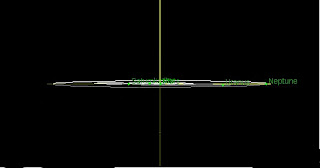 Note how all of the planets' orbits look like a straight line (the vertical line here is the north/south pole of the sun).

Now, here are the same two plots for upsilon Andromedae: 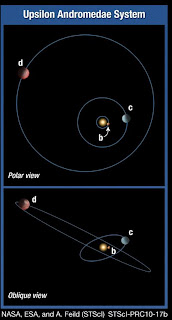 Notice that the orbits are not nice concentric near-circles, and that from the side the planets are greatly tilted relative to one another.
This raises a lot of questions.  Our idea is that planets form in a disk that looks a lot like our Solar System.  In fact, here is a picture of just such disks around stars being born in the Orion Nebula:

Note how similar this is to the drawing of our Solar System seen edge-on, and how different it is from upsilon Andromedae.  How can planets go from forming in a nice orderly disk to such tilted orbits?

Another, perhaps more important question is this: which planetary system, our Solar System or upsilon Andromedae, is a typical, run-of-the-mill, ordinary planet system?  Planetary systems like our Solar System, with nearly-circular orbits and all the planets in the same plane (in a line when viewed edge-on), are nice places to look for life.  We think that life likes stable conditions, and our Earth is in a nice, stable place.  But planetary systems like upsilon Andromedae, with planets that get close to and then travel far from their parent star, don't seem like hospitable places for life.

If most planetary systems are like our own, there could be a lot of life in the Universe.  If most are more chaotic, like upsilon Andromedae, life may be very rare indeed.  Or maybe not.  Perhaps life is more resilient than we give it credit for.

We are probably still a few decades away from being able to detect signs of life on other planets.  Work like this on upsilon Andromedae may help us to figure out where to start looking, and how good our chances of success really are.

Posted by Professor Astronomy at 23:30