Maybe we should have been monitoring volcanoes after all One year ago, volcano monitoring was put forward as an example of wasteful government spending by a prominent politician.  Never mind that the amount of money we are talking, $15.2 million dollars, is only one thousandth of one percent of the federal budget deficit, let's come forward in time a year to the eruption of Iceland's Eyjafjallajökull volcano.  Ash from this volcanic eruption grounded airplanes across Europe, costing airlines nearly two billion dollars.

Why were so many airplanes grounded?  Volcanic ash harms airplane engines.  This page from Boeing describes many of the near-disasters caused by volcanic ash.  We aren't talking about a single incident, but several serious situaitons.  So, when ash from the volcano drifted over Europe, flights were grounded to prevent potential crashes from ash damage.  Now that the ash danger has abated, the finger pointing has begun.  Airlines are blaming governments for being to cautious, governments are blaming airlines for being to risky, and travelers are stuck in the middle with the unexpected costs of an extra week or two of "vacation", plus hassles of trying to get home.

One of the big reasons for this calamity is that we don't have good, hard, scientific data on what types of ash conditions are dangerous.  Certainly flying right through the eruption column would be deadly, and flying in clear air is safe.  So where is the dividing line?

Read more »
Posted by Professor Astronomy at 09:00 No comments: But are there more earthquakes than normal this year?  Geologists keep answering with a resounding "NO!" but most lay people don't believe the geologists.  This seems silly, in that geologists who study earthquakes have saved millions of lives, perhaps in this year alone, by studying fault systems, earthquake probabilities, and building codes.  And it is EASY for anybody to check what the geologists are saying!

20 years ago today, the Hubble Space Telescope was launched on board the space shuttle Discovery, opening a new era in astronomy.  Thanks to the efforts of dozens of astronauts, hundreds of dedicated engineers and astronomers, and millions of interested people around the world, Hubble is still going strong at the forefront of astronomy and science!  Happy birthday, Hubble!

Posted by Professor Astronomy at 00:00

Email ThisBlogThis!Share to TwitterShare to FacebookShare to Pinterest
Labels: Hubble

A Cataclysmic Variable in the Field of the Kepler Mission 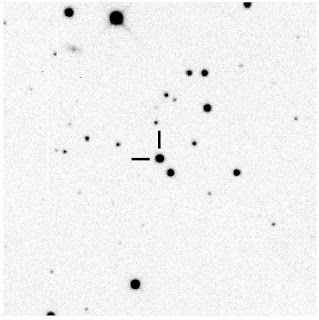 In September of 2008, I was sitting at the controls of the McDonald Observatory 2.1-meter Struve Telescope.  I was there to help some of my colleagues who work on a team associated with NASA's Kepler Mission.  This team, the Kepler Astroseismic Science Consortium, isn't on the lookout for planets.  They are studying the stars themselves, looking for variations in the light from stars caused by sound waves in the star.  The study of these sound waves, known as asteroseismology, allows astronomers to probe the interior structure of a star, just like geologists use seismic waves from earthquakes to study the interior of the Earth.

My specific goal at the telescope was to look for pulsating white dwarfs.  While around a hundred pulsating white dwarfs are known in the sky, none are known in the patch of sky where the Kepler mission stares.  I had a long list of candidates, some that I chose, and some that our European collaborators selected.  One of the stars selected by Viennese astronomer Gerald Handler and his collaborators,  the star in the center of the picture above, had been observed with the Telescopio Nazionale Galileo in the Canary Islands, and looked "interesting". 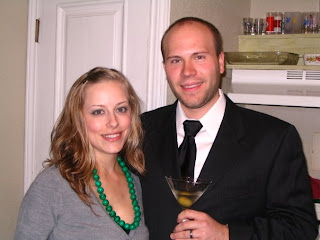 Photo Credit: Emily Bartlett
On Monday, the astronomy community grew as University of Texas graduate student Sean Couch earned his PhD by successfully defending his doctoral thesis.  Dr. Couch finished his PhD in just four years, which is a good year faster than the average.  As you might guess, speed isn't the important factor, it is the quality of the dissertation and the student.  And in both of these cases, Sean is also wildly successful.

I got to know Sean when I taught a course in observing techniques for graduate students three summers ago.  Although he is a theorist, Sean dared to take the course, and he managed not to break any telescopes.  He even successfully took some images of red supergiant stars and found that they were varying in brightness for reasons that we didn't understand at the time (I've since found that this behavior was known, though not well understood).  I later learned that this project, which he developed, was heavily assisted by some of the other graduate students -- Sean's original idea was to look at the star Betelgeuse, which is so bright that it would have burned out our camera, and which is not visible during the summer when we had use of the telescopes.  So perhaps it is best that Sean stuck with theory.

Sean's dissertation involves computer simulations of supernovae, or exploding stars.   Modeling supernovae on a computer is very difficult.  The stars that explode are very large, sometimes as big as Jupiter's orbit, or nearly 200 million miles across.  But the initial explosion takes place in the central hundred miles or so of the star, and the nuclear reactions that power the supernova take place on an atomic scale.   Even the powerful Texas Ranger supercomputer that Sean used for some of his work cannot precisely simulate all the parts of an exploding star, so the models have to be simplified.  As time goes on and computers become more and more capable of performing fast calculations, the models are made more complex.

Read more »
Posted by Professor Astronomy at 10:39 No comments:

I'm literally sitting in a fog at the observatory, so I have lots of time to think up some amazing new blog post.  Instead, I'm working on a wish list for funding and tracking down equipment troubles.  So, here are some links to keep you busy reading for some time.

Email ThisBlogThis!Share to TwitterShare to FacebookShare to Pinterest
Labels: news

Light from a distant black hole pierces the Milky Way

I am back at McDonald Observatory for another observing run, seven nights of staring at the stars.  So of course the weather forecast is for unsettled weather, with numerous weather fronts and troughs passing through.

Tonight started cloudy, but it rapidly cleared as trough number 1 passed through (A trough is a weather feature, like a cold front or a warm front.  This trough had no marked temperature difference here at ground level).   As I went out to marvel at the suddenly star-strewn sky, I noticed that the stars were twinkling furiously, especially those that were setting.  The familiar bright stars of winter, including Sirius (the brightest star in the sky), the twins Castor and Pollux, Capella, and the red supergiant star Betelgeuse were flashing, changing colors, and even briefly winking out almost completely before reappearing with a brilliant flash.

Anyone who has looked at the night sky has seen twinkling stars.  The twinkling we see is not an actual change in the star, but twinkling due to our atmosphere.  Our atmosphere bends light, and if the atmosphere is not perfectly steady, the light from a star will get bent this way and that way.  Sometimes it is bent away from the viewer (causing the star to get fainter), sometimes it is bent toward the viewer, causing the star to get brighter.  This bending of light also depends on the color of the light, so sometimes the blue light from a star is bent away from us while the red light is bent toward us, and vice-versa.  This causes the stars to appear to flash different colors.

This phenomenon is really quite fun to watch.  The star Betelgeuse, which normally shines with a ruddy red color, was dancing to and fro, sometimes appearing steely white, and sometimes it was a bright crimson.  The normally brilliant white star Sirius was rarely white, flashing all colors of the rainbow.

Amid all these wildly dancing stars, there was a bright orange spot that was steady as a rock.  It wasn't changing color, nor was it twinkling.  This was the planet Mars.  Planets rarely twinkle because they are not points of light, but actually appear as disks.  Individual parts of the planet's face do "twinkle", but most of the time the twinkling of different parts of the planet's disk cancel each other out, giving a nice steady glow at a constant color.  However, if the planet is small (like Mercury or Mars when it is far from the Earth), and if the atmosphere is especially turbulent, even planets can twinkle. I've seen it!

While twinkling stars are cool to look at, they are bad news for the astronomer at the observatory.  We get the best data when the atmosphere is the steadiest, and when the atmosphere is turbulent, we get blurry images.  Because of the weather trough that moved through, the atmosphere is quite turbulent tonight.  This makes the stars twinkle, but it also means my images are quite blurry.  In fact, I've had to skip one of my main targets.  It is so faint that the blurry atmosphere blurred the star out to where I couldn't see it well enough to make useful measurements.  I have backup targets, and hopefully the weather will be better for faint targets tomorrow!


Posted by Professor Astronomy at 02:43 5 comments:

One more trip around the sun

In this week's Over The Hedge comic strips, Hammy the squirrel convinces his friends and a few garden gnomes to enjoy a theme-park style ride around the sun, hurtling through space at a nausea-inducing 66,600 miles per hour.  Not only that, but as they hurtle around the sun, they are also spinning at the alarming speed of roughly 800 miles an hour, and the Solar System itself is moving around the Milky Way Galaxy at a mind-bending 492,000 miles per hour (read here if you need reminders on what the solar system and Milky Way are).   Yet, in the end, their chairs don't seem to go anywhere.

This apparent non-motion of us and the Earth were one of the big stumbling blocks for humans in accepting that the Sun is the center of our Solar System, not the Earth.  The Earth seems so solid and still, and the sun appears to move.  It's no wonder the ancients thought the Sun traveled around the Earth!  So, how do we know that the Earth is moving?

Read more »
Posted by Professor Astronomy at 00:09 No comments: