Today I return to my (very) occasional series Astro101, in which I talk about some of the most basic concepts in the science of astronomy.  Since today is the deadline for proposals to use the telescopes available through Kitt Peak and other national observatories, I thought that a natural topic would be telescopes and observatories. Just as a caveat, here I will be defining the two words as they are most often used in present-day astronomy.  As is often the case, there are exceptions, and the definitions have changed over time.  But those are discussions for another day.

Telescopes: At their most basic, telescopes are scientific instruments used to collect and analyze light.  When most people think of telescopes, they think of something like this, the 36-inch refracting telescope at Lick Observatory: 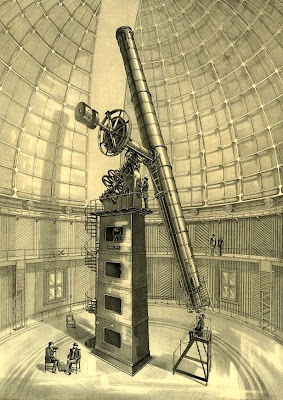 The goal of telescopes is to collect as much light as possible, focus it as sharply as possible, and transmit that light to scientific instruments (cameras) for analysis.   The light-gathering power of a traditional telescope depends on the area (size) of its main mirror.  If you want to collect more light, you need a larger mirror.    This is why the most powerful telescopes in the world are so big.  The sharpness of an image depends on the diameter of the telescope (bigger telescopes give sharper pictures), the wavelength of light (longer wavelengths give blurrier images), and how much Earth's atmosphere blurs the light.  Earth's atmosphere doesn't blur radio waves, but radio waves have very long wavelengths, so the giant Green Bank Telescope cannot produce images sharper than your own eyes.  Optical wavelengths of light are very short, but Earth's atmosphere blurs optical light, so the largest optical telescopes in the world don't get much sharper images than a high-quality backyard telescope, at least not without help.  The Hubble Space Telescope is above Earth's blurring atmosphere, so it can make images 10 to 20 times sharper than the typical ground-based telescope, which is why astronomers like to use it even though its mirror is small compared to the typical ground-based telescope.

More and more telescopes also have a new technology called adaptive optics.  This technology is capable of correcting infrared and visible light for the atmosphere's blurring, allowing a telescope on the ground to make images as sharp as the Hubble Space Telescope at a fraction of the cost!  This technology is still changing and is very complicated to operate, so astronomers only use it if they really have to.

I could go on and on about many details on telescopes, but that is beyond the scope (ha!) of this post.  Let's instead contrast telescopes with...

So, in short, a telescope is a part of an observatory.  A telescope is, at its most basic, a single piece of equipment.  An observatory is a larger entity, a collection of one or more telescopes and all of the associated infrastructure.
Posted by Professor Astronomy at 18:01