Typical nights at the telescope 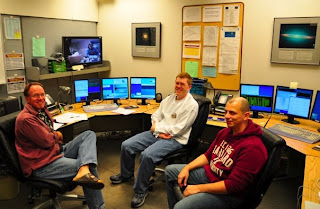 Our observing team and observing support staff sitting in the Keck Observatory
control room last week. Image Credit: M. Bolte
If you read enough comics (especially The Far Side),  you'll eventually come across a sketch of an astronomer at the telescope.  Inevitably, this astronomer is wearing a lab coat, sitting in a chair on the floor of the telescope dome, looking through an eyepiece and making notes in a notebook.  Add in the likelihood that these cartoon astronomers are inevitably male and that the telescope sticks out the slit in the dome, and you have the picture that most people have when they think of astronomers.  (Here's a good example incorporating almost all of those stereotypes: Off The Mark from January 16 2006).
However, this stereotype of astronomers and telescope observing is almost completely wrong.

Here's a more typical view of the modern astronomer taking data at the telescope: 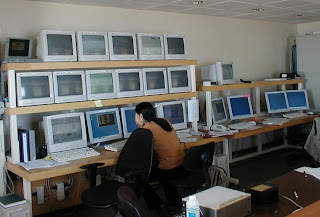 This is Dr. Ivelina Momcheva, an astronomer at the Carnegie Observatories, taking data with the Magellan Telescopes at Las Campanas Observatory, Chile, in February 2003.  You'll note that Dr. Momcheva is not in a lab coat on a dome floor looking through an eyepiece (nor is she a balding middle-age male).  Rather, she is sitting in front of a large bank of computer monitors, watching digital images from the high-tech cameras download from the telescope.  The telescope itself is in an angular dome behind the room wall, isolated from the heat and electronic noise of the control room.
A typical night of observing starts well before dark; in fact, it starts months beforehand when we apply to use a telescope.  These applications, which we call proposals, specify what science we want to do, what objects we want to look at, and which telescope and instrument we want to use to take our data.  A committee then evaluates each proposal on its scientific merits and technical feasibility, and time on the telescopes is allocated to the best proposals.  Typical observing runs can be as short as a single night (especially on high-demand telescopes like the Keck Observatory) to as long as a week or two.

When an observing run draws near, we sit in our offices and make detailed plans.  What objects are we going to look at on each night?  How long do we need to look at each object?  What do we do if the weather is bad, and how do we prioritize our observations?  We prepare charts to help us find our targets.  We check to see if there are any recent changes to observing procedures or to the camera we will be using.  And then we have to travel to the observatory, a trip that can be as short as walking down the hall to a remote control room or as far as the other hemisphere of the planet.  Here in Austin, it involves an 8-hour drive across the plains and deserts of Texas.

In the afternoon before our first night, we go to the telescope control room and learn or re-familiarize ourselves with the camera and telescope controls.  At many observatories, staff control the telescope movements, as it would be dangerous to let sleep-deprived, occasional users of a telescope play with tens or hundreds of millions of dollars worth of equipment.  We then get to work taking whatever calibration data we need.  This data is often some of the most crucial images we take, but they are also incredibly boring: pictures of blank white screens, exposures where we keep the camera shutter closed, and pictures of lamps taken through the filters and spectrometers we'll be using during the night.  Each of these calibrations has their own purpose, and they have to be taken carefully.

After a break for supper and sunset, we can finally begin to take the pictures and spectra of our target stars, galaxies, and planets.  The telescope and camera take minutes- to hours-long exposures while we sit in front of a computer, drink coffee, check email, write papers, blog, and check the quality of any completed exposures.  We keep an eye on the quality of our data, the time of night, and the weather conditions.  And we steadfastly refuse to wear lab coats.

Most people would probably find typical observing nights boring.  Most of our discoveries will come later, back in the office, after careful analysis of the data we took.  "Eureka!" moments at 3am are rare, though they do happen from time to time.
Posted by Professor Astronomy at 02:47