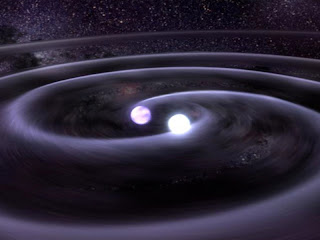 Supernovae are, at their heart, exploding stars.  There are two main types of supernovae.  One kind is the explosion of a massive star (a star with a mass at least 7 or 8 times that of the sun) after it has used up all of its nuclear fuel.  These explosions leave behind neutron stars and black holes.


Stars not massive enough to explode as this type of supernova form white dwarf stars.  Lone white dwarfs are, at their essence, the slowly fading embers of a dead star.  Left to themselves, they will slowly cool and fade away.  However, if we somehow add material to a white dwarf, the white dwarf will gain a little mass.  If we keep adding more and more material until the white dwarf reaches a critical limit we call the Chandrasekhar mass.  At this point the white dwarf becomes unstable and explodes in a runaway nuclear fusion reaction.  We call this type of explosion a "Type Ia supernova" ("Type Ia" is a historical moniker from before we understood what was exploding), and the supernova completely obliterates the white dwarf.  No neutron star, no black hole, no nothing is left behind.

Because the Chandrasekhar mass is a single number, about 1.4 times the mass of the sun, each explosion is roughly identical.  This means that every Type Ia supernova we see, whether nearby or halfway across the universe, is roughly the same.  Because of this, we astronomers use Type Ia supernovae to tell us how far away the explosion is -- how bright the supernova appears depends only on how far away from us the explosion is.  I'll admit this is an oversimplified explanation, but it's not too far off.

In the 1990s, two separate teams of astronomers used Type Ia supernovae to measure distances to dozens of very distant galaxies, and they used that information to infer the presence of "dark energy."  Dark energy is, well, we don't really know what it is.  All we know is that it seems to act like an energy that exists in otherwise empty space.  This is not a very physical explanation, so physicists and astronomers are trying to understand what dark energy actually is, not just what it kinda looks like.  One way to do this is to look at more and more Type Ia supernovae, because different hypotheses for dark energy distribute galaxies differently.  For this to work, we have to be absolutely certain we know what we are looking at when we see a Type Ia explosion.

However, there is one very big thing I've swept under the rug.  Remember that I said Type Ia supernovae are caused by white dwarfs that gain mass until they explode?  This explanation doesn't state how white dwarfs gain that material.  There are many ideas for how this happens, and these come in two main categories.  In one category, a white dwarf has a companion star.  Maybe it is a normal star, maybe it is a dying star -- it just isn't another white dwarf.  If the white dwarf and its companion are close enough, the white dwarf's gravity can start to pull material from its companion and grow until it is big enough to explode.  In the other category, the white dwarf's companion is another white dwarf.  In this case, the two stars clowly come together and merge into a single star.  If that single star is more massive than the Chandrasekhar limit, it will explode.

For three decades now, astronomers have been arguing about which category of Type Ia supernova triggers are correct.  We know of many white dwarfs that are stealing material from a normal companion star, but most of these systems, maybe all of them, don't grow the white dwarf enough for it to explode.  In the other category of two white dwarfs, while we know many binary white dwarfs, we don't know of a single unambiguous case where the white dwarfs are close enough for them to spiral together within the lifetime of the Universe (but these are very hard to detect, so maybe we aren't seeing them even though they are there).  Many teams have made many arguments, including arguments based on physics, the evolution of stars, observed binary stars, observed numbers of Type Ia supernovae, the types of galaxies with Type Ia supernovae, and many, many other lines of arguments.  And the answer is never unambiguous.  We don't know what is exploding.

Now the people who look at Type Ia supernova and use them for studying dark energy will say that it isn't important, because we know what the system looks like right at the time of explosion: a white dwarf at the Chandrasekhar mass.  And for detecting dark energy, I believe these observers are right.  But for testing detailed explanations for dark energy, we are taking a big chance. It is very possible that the exact details of the system that explodes makes very tiny differences in the explosion, and those tiny differences may be mistaken as a sign of different dark energy hypotheses.

Because a lot of astronomers want to use Type Ia supernovae to explore dark energy in detail, we need to know, in detail, what is exploding.  And we don't.

So, on to the new study.  The new study uses the Chandra X-ray Observatory to measure how many X-ray photons are coming from a certain type of galaxy, elliptical galaxies.  Why X-rays?  White dwarfs that are growing by pulling material off of a companion star (the first big category of possible Type Ia progenitors) should release lots of X-rays.  And the amount of X-rays the astronomers saw from elliptical galaxies was a lot lower than predicted if all Type Ia supernovae come from this category of white dwarfs.  So, the astronomers running the stude concluded that most Type Ia supernovae in elliptical galaxies come from the mergine white dwarfs.

But there are complications.  The gas that white dwarfs steal from their companion stars is very good at blocking X-ray light.  So, the X-rays may be produced on the white dwarf and immediately hidden by the gas that is about to be swallowed by the white dwarf.  Another complication is that this study assumes all Type Ia supernovae come from exactly the same type of system.  But a growing number of astronomers feel that more than one, maybe all, of the possible Type Ia supernova progenitors exist.   Such a possibility greatly complicates the interpretation of the X-ray data.

So, in short, I think that the new study adds another piece to the puzzle.  The problem is we don't know where that piece goes.  So, headlines claiming that we've solved the problem of the source of Type Ia progenitors are wrong.  We have more information, but we don't fully understand what it means.  That will take a lot more work, and I'll let you know if and when we make progress!
Posted by Professor Astronomy at 12:39