It's the size of Earth with lots of oxygen, but not a nice place to be. 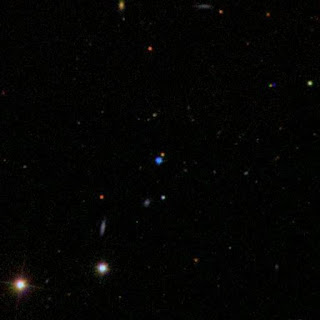 Image Credit: Sloan Digital Sky Survey
Some acquaintances of mine in the United Kingdom have discovered two white dwarf stars that have a lot of oxygen in their atmospheres.  One of them, with the typical boring star catalog name of SDSS J1102+2054, is the blue dot in the center of the image above.  Although white dwarfs are roughly the size of the Earth,  the star in the color picture looks blue like the Earth, and we all love oxygen, this would not be a nice place to vacation.

White dwarfs, as I've mentioned many times, are the glowing embers of stars that have used all of their nuclear fuel.  For most of a star's life, it runs a nuclear fusion reactor in its core, and fuses the element hydrogen into the element helium.  Once all of the hydrogen is used up, the star usually begins to fuse helium into carbon and oxygen.  Most stars stop here, but if the star has enough mass (at least four or five times the mass of the sun), the star can begin to burn carbon into oxygen and neon.  The most massive stars (those more than 7 times the mass of the sun) continue to do nuclear fusion of heavier elements until they make iron, then they end their lives as supernova explosions.


However, 98% of stars, including the sun, stop by making carbon and oxygen or oxygen and neon, and lose their outer layers as a planetary nebula.  The ashes left from nuclear fusion are then squeezed by gravity into a sphere about the size of the Earth, but containing a lot more matter -- anywhere between half the mass of the sun to one and a third times the mass of the sun!  For comparison, the Earth itself has only 3 millionths the mass of the sun.  These compressed nuclear ashes are also white hot, starting off at hundreds of millions of degrees!  Since they are white hot and small, we call these stars white dwarfs.

Most white dwarfs (about 75% to 80%) are covered in a layer of hydrogen that avoided nuclear fusion.  Think of it as the fumes in the stellar gas tank.  Hydrogen is a light element, so it burbles to the top of a white dwarf.  Most other white dwarfs (20% to 25%) don't show evidence of much, if any, hydrogen.  Instead, they have atmospheres made mainly of helium, the next lightest element.  Where did the hydrogen go?  The main hypothesis is that, for some reason, these stars had a final, late, last burst of nuclear fusion that burned up all of the remaining hydrogen.  We think we've actually seen this burst of nuclear fusion happen in at least star, a star known as Sakurai's Object.

In a very small number of white dwarfs, we don't see any helium, either.  Instead, we see atmospheres made almost entirely of carbon.  In this case, any hydrogen or helium has either been stripped away or burned by a really vigorous late burst of fusion (since helium fuses into carbon, but this takes very, very high temperatures).  My colleagues and I are studying these carbon-atmosphere white dwarfs, and we've found they have some neat and difficult-to-understand properties.

But, let's back up to the helium-atmosphere white dwarfs.  As these stars cool, their outer layers start to churn in a process we call "convection."  You can think of convection like pot of simmering soup.  Broth at the bottom of the pot warms and expands. This makes it lighter than the other broth  around it, and so it starts to rise.  As it rises, it cools off and starts to sink again.   The cool broth sinks to the bottom of the pan, where it warms back up and starts to rise again.  This process stirs the soup gently, and can stir the soup if it's vigorous enough.

This isn't too surprising in and of itself.  After all, as I said at the start of this post, most stars produce mostly carbon and oxygen in their nuclear fusion reactions, so that carbon and oxygen should stay there, buried under the lighter helium and hydrogen that rise to the top of the atmosphere.  So, if the atmosphere gets stirred really deeple, these heavier elements will appear.

The fascinating thing about these two new white dwarfs is that their atmosopheres show oxygen, but not carbon.  That's weird.  It'd be like looking in your rice and bean soup and seeing beans, but no rice.

Where is the neon, you may rightly ask?  Neon is heavier than oxygen, and so will sink even deeper in the white dwarf.  And I don't know how easy it is to see neon in white dwarfs at these temperatures, so it may be there, but hard to see (I need to look into this...).

There's still lots of work left to do to understand these new stars.  Though they are weird, they seem to fit what we might expect based on our theories of stellar nuclear fusion.  If the guess that these stars come from massive stars is correct, then we would also expect the white dwarfs to be more massive than typical white dwarfs.  We might (or might not) expect to be able to see some neon.  And there are some other detailed predictions that we can test with some new observations.

Last topic: here's an object about the size of the Earth, and there seems to be "lots" of oxygen around.  Could there be any life on this star, now or in the future?  Definitely not now, and almost certainly not in the future.  Right now, the stars' surfaces are about 10,000 degrees Celsius (18,000 degrees Fahrenheit), hotter than the surface of the sun! That's why the white dwarf appears blue in the picture above; very hot stars glow with a bluish color.  Not only could no life on Earth survive those temperatures, the building block molecules of life cannot form at these high temperatures.  In the future, the white dwarf will cool, until tens of billions of years from now its surface will be roughly the same temperature as the Earth.  Even then, though, there's not any reasonable hope for living creatures.  Because white dwarfs have so much matter packed into a small sphere, the pull of gravity on their surfaces is 100,000 to 1 million times that of the Earth!  It's hard to imaging any type of life that could survive that crushing pull of gravity.

Update: These two stars do have some carbon, they just have a lot less carbon than oxygen, when most white dwarfs are the other way around.  And I knew that, but I typed it wrong anyway.  Sorry!

Posted by Professor Astronomy at 11:54