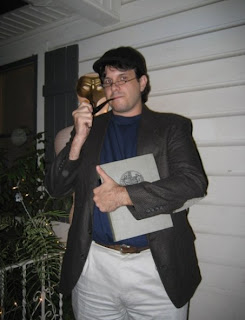 Today, we astronomers are honored to welcome yet another newly-minted PhD into our midst: Steven DeGennaro.  Steve is a graduate student here at the University of Texas at Austin, and this afternoon he successfully defended his doctoral dissertation.

Steve is in the white dwarf group here at Texas, so I've gotten to work closely with him over the last three years.  He has studied many aspects of white dwarf astronomy, and loves to get down and dirty in the awful details of analysis, including selection functions (What type of stars were various observations sensitive to?  It's easy to answer in a general way, and very difficult to determine in detail) and statistical analysis.


Steve's dissertation covers many topics, with one central focus being how to better determine the ages of clusters of stars and their white dwarfs.  Steve, with collaborators here at Texas, developed a computer program that uses Bayesian statistics.  Bayesian statistics are often viewed with skepticism in astronomy.  In Bayesian analysis, it is possible to take a lot of data that has many interelated parameters and observations and producing a self-consistent description of the data.  It's conceptually simple but fiendishly difficult to execute properly.  Steve has produced a program that has been shown to work (i.e., produce the answers we expect) on some of the best-studied star clusters in the sky, such as the Hyades.

Steve was the observer at the telescope when we discovered our new class of pulsating white dwarfs, the carbon atmosphere white dwarfs.  For this reason, we sometimes refer to those stars among ourselves as DeGennaro's Degenerates (which would also be a good name for a rock band).


Steve has also helped out at the last three white dwarf teacher workshops.  He bonds well with the teachers (partly because he previously served a tour of duty as a high school science teacher), and he did an excellent job training our participants how to use the telescopes and cameras.

Now his dissertation is complete, Steve will be leaving the field of astronomy to work in motion pictures.  Right now, he's excelling as a sound editor in local productions.  While there are many astronomers who view this as a waste or as selling out, I disagree.  Steve's done excellent astronomy research, and the field will miss his contributions.  But there is also no reason to keep plugging away at climbing the academic ladder if one's preferences lie elsewhere.

Too often, I think astronomers tend to undervalue the accomplishments of reaching various milestones that the rest of society admires, such as earning a master's degree and a doctorate degree.  For many astronomers, those achievements just mean you've jumped through another hoop and now have to face the daunting climb up the next step.  But these are impressive accomplishments, and anyone who wants to admire their accomplishment and then head off in another direction should be given a rousing sendoff and be remembered fondly for their accomplishments, not with sadness over the academic career that might have been.

So, in a few years, when you notice that the sound quality of motion pictures has increased a hundredfold due to a new DeGennaro editing process, just remember that astronomy is what made it possible.

Posted by Professor Astronomy at 15:36

Email ThisBlogThis!Share to TwitterShare to FacebookShare to Pinterest
Labels: astronomers