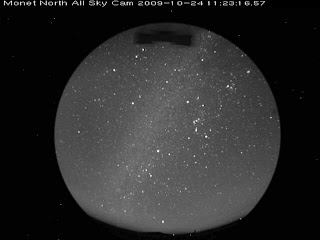 Crystal clear skies.  Maybe even clearer.  This is how I like my observing runs.

I'm finishing the 10th night of a 13-night observing run dedicated to looking at my favorite white dwarf stars.  I haven't been out here all ten nights, as two of my colleagues kindly volunteered to cover the first nine nights of the run.  In those nine nights, the weather was ideal for seven nights.  Tonight has also been great, and it looks like at least two and maybe all three of the remaining nights will also be clear.  Given that two-thirds of my telescope time has been clouded out over the past 18 months, I'm grateful to finally be getting a lot of high-quality data.

This run has had me worried for a long time, and not because of triskaidekaphobia.  Two days before the run started, one of my volunteers had a family emergency, so I had a stressful 48 hours rearranging the observing schedule.  Then one of my cats got quite ill, and I wasn't sure how to make sure she was taken care of while I was gone.  (Thankfully she recovered enough that my pet sitter has been able to take care of her.)  Then one of my volunteer observers fell ill here at the mountain (she fully recovered).  About the same time, I got word from Arizona that one of my colleagues there was in the hospital and not doing very well (he's not recovered, but at least is stable and was able to go home).  Lastly, as I was preparing to leave Austin, I accidentally dinged the side of another car with my car door; the owner of that car got absolutely livid over the 1/8-inch long scratch (no dent, but I did flake the paint and primer off), so I spent an hour on the phone with insurance.

Still, the clear skies and good data are worth most of the stress.  The moon and Jupiter dominated the evening skies, and all morning I've seen a dribbling of bright, fast-moving meteors, the last dregs of this week's Orionid meteor shower.  Now the planets Venus and Saturn are rising, and the first hints of dawn are on the eastern horizon.  Time for bed!

Posted by Professor Astronomy at 06:59

Email ThisBlogThis!Share to TwitterShare to FacebookShare to Pinterest
Labels: observing