When it absolutely, positively has to be observed overnight 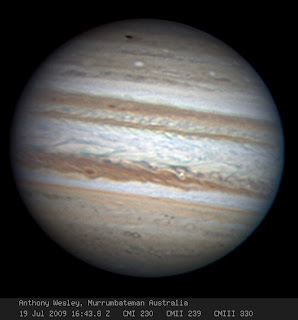 Last weekend, Australian amateur astronomer Anthony Wesley snapped pictures of a dark spot on the face of Jupiter, which turned out to be the scar of the impact of an unknown asteroid or comet into the planet. This conclusion came after rapid follow-up of Wesley's discovery by professional astronomy telescopes around the planet.

Getting professional telescopes to follow up an event like this is no easy task. Telescopes are scheduled six months or more in advance, and an astronomer who has waited six months for a night or two at the telescope is not going to always willingly turn the telescope and look at something that other people think is cool, but is outside the astronomer's research area. But data on unexpected short-lived events, such as unexpected whackings of Jupiter, or supernovae or gamma-ray bursts are obtained. The story of how is a bit illuminating of the many forces that go into scheduling telescope time.

As I blogged last week, telescopes are primarily scheduled in one of two methods: classical observing, where the astronomer has a block of nights at the telescope and has to travel to the telescope to take the observations, and queue observing, where all of the approved programs are ranked and a staff scientist takes data depending on which objects are up, which instrument is available, what the weather is like, and which project meeting these criteria is most highly ranked.

As you might be able to guess, it is often easier to get data on an unexpected event on a queue scheduled telescope than on a classically-scheduled telescope. In the case of the recent impact on Jupiter, teams interested in getting observations can call the head of the observatory and ask for what is often called director's discretionary time. The director of the observatory can then call the staff astronomers and say, "When Jupiter rises more than 30 degrees above the horizon, take the following observations for Astronomers X, Y and Z." And that trumps whatever the queue says to do.

There are two major complications. First, if a really neat event (like the Jupiter impact, or like a supernova in the Milky Way galaxy) happens, more than one group will call the director and ask for observations. Then the director has to choose which group will get the data (or perhaps she'll decide to let each group get all of the data, and require them to work together, or decide to divvy up certain observations). This is hard to do, and often must be done with only a few hours to make a choice.

Second, time-critical events like gamma ray bursts and supernovae are discovered somewhere in the sky every few days. While it isn't possible to predict where a supernova or gamma-ray burst will happen, we can predict that some will happen. In these cases, the astronomers are often required to propose observations in the normal six-month cycle, saying something like "I want to observe six supernovae to be named later, getting a spectrum 1 day, 5 days, 10 days, and 30 days after the explosion." If such a project is approved, when a supernova is discovered, the astronomer uploads the coordinates to the queue-scheduling computer, which then gives the observations highest priority the next night that the weather is clear. This process keeps an observatory director from getting several phone calls a day from ten groups asking for observations of a gamma-ray burst just discovered. It also forces the astronomer to think about which supernovae or gamma-ray burst to observe. If the astronomer has approval for six supernovae, and uses that on the first six supernovae discovered in a semester, he'll miss out later in the semester when that once-in-a-lifetime supernova happens in the Andromeda Galaxy.

On classically-scheduled telescopes, it is often trickier to get time-critical observations. If something really important has happened, the astronomer at the telescope can often choose to look at the object herself and collect and use the data. Often the observer will also get emails from colleagues begging for some quick data on an interesting event, and it then is the observer's prerogative whether or not she gets data for her colleague. For cases like this, there is often a you-scratch-my-back-I'll-scratch-yours mentality. If I get data for you, and a year later I ask you for data and you don't make any effort to take it, fat chance at me ever taking more data for you.

The director can also preempt the observing astronomer and force observations to be taken of interesting events. This is pretty rare, because it ruffles a lot of feathers and causes nightmarish headaches and inquiries for the director. The event had better be pretty darn important for this to happen, like a supernova in our own galaxy.

Many classically-scheduled observatories also have some version of Director's Discretionary Time. At national observatories like Kitt Peak, projects can be awarded time for transient events, and the observing astronomer can be required to take up to one hour of the night to take such observations. That happened to me once, and it really upset me. I'd travelled to Chile and sat through three nights of winter storms and clouds. On my fourth and final night, the sky was clear and steady, and I prepared to take as much data as quickly as I could. Then my phone rang, and one observer who had a project for gamma ray bursts pulled the trigger on their discretionary time. So I was required to do their observations for one hour of my only clear night. Not only that, but they'd made a poor choice of gamma ray burst -- if they'd consulted a star chart, they'd have seen that the burst was happening almost directly behind the center of the Milky Way, and so it was hidden by thousands of light years of dust, and we saw absolutely nothing. But since it was an approved program, I got no compensation for the lost time. That still makes my blood boil.

In general, though, most astronomers are very good about only asking for discretionary time when it is really important and really useful. And most classical observers will take a half hour or so to go and get important, time-sensitive data for a colleague, especially if the colleague has a good reputation and pays back the favor.

In short, getting data on a time-sensitive astronomical event is difficult to arrange and requires dabbling in politics and interpersonal relationships as well as simply science. So, when you see pictures of a new supernova or an impact on Jupiter, remember that a lot more effort went into getting that image then just pointing the telescope and clicking the shutter. In my opinion, getting large volumes of data quickly is almost as impressive as the events themselves.