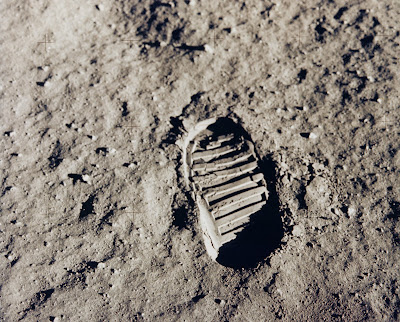 Yesterday, as you all probably know, was the 40th anniversary of Neil Armstrong and Buzz Aldrin's moonwalk, the first steps by humans on the Moon. Other news outlets and blogs are giving their opinions of the meaning of the Apollo landings for the world. Others are giving their recollections of where they were and how they felt when men from Earth landed on the Moon. I have little to add to the former, and nothing to say at all on the latter, as I was not born until a year after Apollo 17's first day of moonwalking. So, let me look forward instead. NASA is planning on a return to the Moon, and many people are wondering if this is a good idea, and what we'll do if we go back. What would we do on the Moon if we returned?

Astronomy. The Moon offers some unique opportunities for astronomy research. The far side of the Moon is a wonderful place to do radio astronomy. The Earth is a noisy place for radio astronomy. All of our radio and TV broadcasts, cell phones, wi-fi, satellite transmissions, and even electric transmissions create radio noise that make it difficult to study astronomical objects in the radio from Earth. In addition, Earth's ionosphere reflects many wavelengths of radio waves. This is great for shortwave radio operators, who can talk with other radios on the distant parts of the planet as radio waves are bounced around the curvature of the Earth, but bad for astronomy, since those waves are reflected back into space. The Moon has no ionosphere, and the 3500 kilometer-thick ball of rock that the Moon provides is great for blocking all radio signals from the Earth. The only problem with radio astronomy on the Moon is that the moment we have people on the Moon, we are going to want communications satellites in place that bathe the far side of the Moon in radio waves. With smart planning, though, such as using radio wavelengths that we can already study perfectly well from Earth, this may not be a huge problem.

All other types of astronomy are possible from the Moon, including infrared, optical, X-ray, and gamma-ray astronomy. Here, though, the general consensus is that satellites are better. The Moon's gravity attracts micrometeoroids (what we would see as meteors on the Earth) that would slowly pit and degrade lunar mirrors. The temperature swings are also quite high (except in permanently shadowed craters near the lunar poles, which limit the amount of sky we could look at); such temperature swings are hard on equipment. Telescope repairs and new instrumentation would be easier on the Moon than in space. I think most astronomers feel that non-radio astronomy is probably best done with orbiting telescopes, and it's probably cheaper with orbiting telescopes. But, if we humans are going to the Moon anyway, and if more and more NASA funds are going be funnelled toward the manned program, a lunar telescope may be astronomy's safest bet to continue to have large space-based telescopes in the near future. I think this last sentence is a point most of us astronomers should pound into our thick skulls as we plan future space telescopes.

Geology. I guess the proper term is selenology. While the Apollo astronauts brought back hundreds of pounds of moon rocks, only one Apollo astronaut (Harrison Schmitt) was a geologist by training. Having participated in a couple of paleontological expeditions in the past, I feel confident saying that the trained geologist will always have a faster and sharper eye than a non-geologist when it comes to selecting interesting rock formations for sampling. Selenology would not only consist of understanding the formation and subsequent evolution of the Moon, but also collection of meteorites that are far-better preserved than those found on the Earth. This helps with understanding the formation and evolution of the Solar System.

Could robotic rovers driven by geologists explore the Moon more cheaply and select samples for return to Earth for study? Perhaps, though I suspect a geologist on the Moon would be faster and more reliable. This would be a point for planetary scientists to argue over.

Biology. The Moon would probably be a great place to study some of the hazards of space travel, such as long-term exposure to radiation. Some of this can be done on the International Space Station, but the Moon mostly stays outside of Earth's protective magnetic field. If we have aspirations of human travel to Mars, we must better understand how to protect the astronauts from radiation hazards, and the Moon provides a more typical space radiation environment than Earth orbit. Here the problem is that space biology is not quite as sexy for the Earth-bound taxpayers who fund the research, though this is perhaps the most pressing research needed for future space exploration. ("Moon Mice do/don't get tumors as fast as we feared" versus "3-pound chunk of Venus found at center of crater" versus "Magnetic anomaly in Tycho crater leads to discovery of a black monolith") This research could also shed light on some controversial ideas such as panspermia, the idea that life routinely travels between habitable planets in the Galaxy by hitching rides on meteoroids.

Other reasons for returning to the Moon, such as national pride, international cooperation, or some sort of space Manifest Destiny are not nearly as compelling to me, though they are compelling to other people.

If we as a species do decide to return to the Moon, then we need to meet one challenge that we have only accomplished once (through Apollo) in space exploration: to make a decision and stick with it, through thick and thin. In space exploration, we tend to set goals, then revisit them, then cut funding, then restore funding, then redesign, then cut some funding, then restore a fraction of the funding, then redesign again, then start the project, then revisit and redesign it, then tinker with the budget yet more. To make a return to the Moon worthwhile, we need to make a commitment that we realize will last longer than any one career, or than any one economic cycle. For if we only go for another six short visits, then we will not have advanced at all, which would be a shame.

Posted by Professor Astronomy at 08:50