Image Credit: The University of Texas McDonald Observatory
Today is the seventieth anniversary of the dedication of the first telescope at the McDonald Observatory. Here is a memorandum on the occasion from the current Director of the Observatory, Prof. David Lambert (links added by me):

Today is the seventieth birthday of the McDonald Observatory. On Friday, May 5, 1939, the 82-inch telescope was dedicated (13 years after W.J. McDonald's death on February 6, 1926).

Recently, I have been rereading parts of David Evans and Derral Mulholland's book "Big and Bright". I thought it would be fun on this birthday to recall the birth of the McDonald Observatory.

Finally, it was Friday, 5 May 1939; the long-awaited day had arrived. The participants were transported by bus to the observatory, where the ceremonies were to be held on the observing floor of the telescope dome. There, they found Elvey at the mechanical controls of the telescope and observing stations, Seyfert running the projector, and Kuiper serving as scientific aide to the press.

Henry Norris Russell presided over the morning session, which Harlow Shapley opened with "Recent Advances in Astronomy." He was followed by J. Gallo of the National Observatory of Mexico, who described astronomical work in his country. The morning wound up with a description of the telescope by J. S. Plaskett. Telescope domes are not renowned for their acoustics. Plaskett, speaking on the technicalities of mirror testing from the top of the coudé spectrograph housing, was alternately inaudible and incomprehensible.

For the official participants, lunch break was a full-blown chuck-wagon barbecue dinner and rodeo at the Prude Ranch, compliments of the Warner and Swasey Company. Earlier, company treasurer John C. Kline had remarked on the cost, but had added that "Charles Prude understood that [Charles Stilwell] wanted a real show, and . . . we will get one." The astronomers were treated to several regular rodeo events, such as cattle roping, bronco riding, and calf bulldogging in an arena improvised from a row of parked automobiles. There was also a parade of "old-timers" and a Mexican band.

The formal dedication ceremonies resumed at 3:00 P.M., along with the arrival of bad weather. Most observational astronomers are inured to such perversities of natural phenomena. Nonetheless, one participant wrote home with the comment that "it is said to rain here only five days out of the year, and we have already had 60% of this year's quota in the past week."

The final speaker at the afternoon's dedication ceremony was University of Texas President-elect Homer P. Rainey, who declared that:

"We are here to dedicate the Observatory to the most ancient and purest of all the sciences. [May it] stand as a symbol of the freedom of man's mind to explore the boundless areas of truth without any restrictions whatever. To these ideals, I dedicate the McDonald Observatory in the name of the University of Texas, and I now declare it open for research."

This last was a mild bit of hyperbole, however excusable. The McDonald Observatory had been open for research for most of five years, and even the McDonald telescope had been in use for two months.

Letters and telegrams were sent to wish the McDonald Observatory well. In this the International Year of Astronomy, I take, as my final extract from "Big and Bright," this delightful piece:

A unique communication came from the astronomers at Florence, Italy. It is a highly decorated colored scroll inscribed in Latin. Translated, its message reads:

From the hills sacred to the memory of Galileo, who was the first man to scrutinize the stars with a small telescope, the astronomers of Arcetri join in greeting at its inception a New World observatory that will reveal the paths of the universe.

Dated at Florence five days after the kalends of May 1939, the 17th year of the restored Fascist era

Strictly speaking, that date would have meant the sixth of May, but maybe the Florentines were a little hazy about the exact date of the dedication. The document was signed by several distinguished Italian astronomers, among them Giorgio Abetti, Atilio Colacevich, Guglielmo Righini, and Mario Fracastoro.

Their scroll can be found in the Peridier Library. (see photograph below)

On this, the 70th birthday of our Observatory, let's drink a toast to Astronomy at UT Austin, the W.J. McDonald Observatory, the Department of Astronomy, and colleagues and friends past and present. 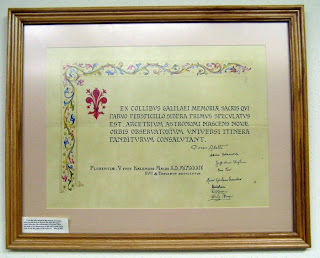 Posted by Professor Astronomy at 10:39