I specifically requested clear skies in my proposal 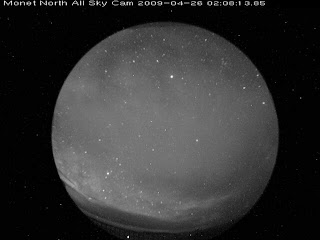 This week I am at McDonald Observatory, using the Otto Struve telescope to look at white dwarfs. Those of you who follow me on Twitter know that I've been whining about the "ongoing advection of Pacific moisture", as the National Weather Service so succinctly calls the stream of clouds coming up over western Texas last night and tonight. The image above is captured from our all-sky camera (which we'll put up on the web for everyone eventually), and it shows some of the better weather of the past two nights. You can actually see a few stars peeking out from behind the clouds.

Weather is one of the more frustrating parts of astronomy. I've had to sit on mountain tops through snowstorms, rime (ice fog), hurricane-force winds, and thunderstorms, as well as many nice nights. Personally, my least favorite observing weather is high humidity. It can be a clear night, with very steady skies, yet if dew is forming, you have to shut the telescope to protect it and the electronics from dew.

The problem with bad weather isn't just that we can't take data, after all, the stars will still be there tomorrow in all but the rarest cases. The problem is in how bad weather interplays with how telescope time is assigned.

Telescope time is assigned months in advance. We write short proposals asking to use telescopes for a certain project. A committee then reads all the proposals and judge each proposal on two primary criteria: is the science worthwhile, and can the proposed telescope time achieve those goals?

For the latter question, we have to explain in our proposals exactly how much telescope time we need, and how we came up with that number. For example, suppose we want to watch a planet transit in front of its parent star. These transits last a few hours, and you want to get a little bit of data before and after the transit. So, for a single transit, one night (7 or 8 hours) of data might be enough. But perhaps you need more than one transit. Maybe you think that the time between transits is slowly changing, maybe due to another planet pulling on the system with its gravity, and you figure that you need to see at least four transits to calculate that difference. So, you'll need four nights, one for each transit. And the telescope committee will be happy to see that you know exactly what you need, they like your science, and they give you four nights on the telescope.

When those four nights on the telescope come up, you go to the telescope and sit for four nights. On two of the nights you get good transit data, but then it gets cloudy and you get no data your last two nights. You need those extra two transits to do your project, but someone else is scheduled to come on the telescope the next night. You can't bump them off; your turn is over, and someone else gets their turn now. Essentially, you are in trouble; you can't finish your project until you get more telescope time, and the next set of time won't be awarded for four months, by which time your star is behind the sun for the rest of the year.

So you wait a whole year for your star to come around again, and you write your new proposal for telescope time, saying "I needed four nights, you gave me four, but the weather was bad on two, so I need two more nights to finish my project." The telescope committee gives you those two nights, and you go to the telescope, only to lose one of those nights to bad weather. Once again, you have to wait another year, and hope that nobody else is doing the same project and having better luck with the weather.

You might think the solution would be to build in time to allow for the weather. For example, if the weather is bad half of the time, you might ask for eight nights instead of four. But telescope committees don't like that. What happens if you get eight clear nights? You've wasted four clear nights that another project could have used!

You might think that you could try and pad your proposal, saying that you need eight transits, and so you need eight nights, though you know that you really only need four. If you can get away with this, it works, but telescope committees are pretty good at sniffing out padded proposals

So, what is an astronomer to do? There are many options, ranging from asking for what you need and hoping for the best, to padding the proposal and hoping you don't get caught. Myself, I try and set up multiple tiers for a program. For example, I may say that the best science I would like to do requires six nights, but I can still get useful information from four nights. That way, I'm being honest that I'm asking for more than the absolute minimum, but I'm pointing out that the extra couple of nights would not be wasted, but make the science all the better. This approach seems to work pretty well.

So, for this observing run, I asked for eleven nights to look at my white dwarfs, though I could still get useful information from six or seven nights. And I got eleven nights. Tonight is night 6, and I've had two good nights and four bad nights. So, I'm starting to get nervous. Any more bad nights, and it will be difficult to accomplish my project, and the weather is looking iffy for at least the next two nights. I need some good weather, and soon!

Posted by Professor Astronomy at 02:07