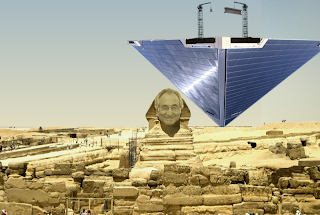 Artist's conception of the Great Madoff Telescope, soon to be built in the Egyptian desert.

Astronomers of the University of Texas State at Junction and the University of Giza announced today that they will be constructing the world's largest telescope in the Egyptian desert using a novel, pyramidal design.

The Great Madoff Telescope, or GMT, is named after its primary designer and largest financial donor. With a minimum aperture of 139 meters (the size of the Great Pyramid of Giza), this telescope will be the largest telescope ever constructed.

"The most striking feature of this telescope, next to its size, is its inverted pyramidal shape," said Olaf Pilor, professor of astronomy at UTSJ. The Giant Madoff Telescope's design is based on a novel scheme by engineer Chuck Ponzi. Mirrored panels on each level of the pyramid reflect light down to the next level, which in return reflect it down to the following level, and so on, until the light reaches the apex of the pyramid, at which point it is funneled into the Giant Madoff Telescope Control Center.

Once in the control center, located in a sphinx-shaped building carved to look like the telescope's primary benefactor, the light is re-directed into numerous rooms, nooks and crannies. At this point, astronomers hope to be able to examine the light using sensitive instruments known as regulators. "The final design of these instruments has yet to be decided," intones Pilor. "Mr. Madoff has not yet provided final details on the layout of the instrument room. However, we trust his word that everything will be ready on time."

One of the most daunting aspects of the Giant Madoff Telescope project will be the construction phase. "We have to start with the tip of the pyramid," says Pilor. "We then add the mirror banks, one level at a time. With each additional level, more light will be funneled to the GMT Control Center. In short, the more we build, the more we get."

When asked how many levels the completed telescope will require, Pilor demurred. "We'll see," he said. "As long as each new level can supply the previous levels with sufficient light, I don't see any real limit to the eventual size of the telescope."

The Giant Madoff Telescope represents the second ambitious astronomical undertaking at the University of Texas State at Junction. Their first endeavour, a solar telescope designed by Princeton physicist Freeman Dyson, will provide astronomers their first ever simultaneous mapping of the entire sun, as well as provide roughly 400 Yottawatts of energy for the Pedernales Electric Coop of central Texas.

Posted by Professor Astronomy at 02:00