Looking for other Earths 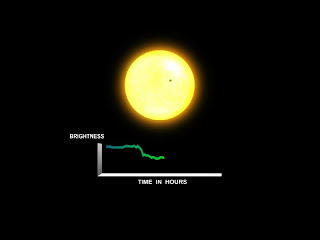 Sorry for the dearth of blogging recently. About a week ago my main work computer was repaired after nearly a month of downtime, and I've been trying to catch up on computer-intensive work that was past due. I'm mostly caught up now, just in time to go on the road for a few days.

It is rare that, in advance, we can point to an upcoming astronomy experiment and say, "The results of this experiment will change the way we think about the Universe." In most cases, like new telescopes, we know that many interesting discoveries will be made, but we can only guess at what they will be. For example, we astronomers new that a working Hubble Space Telescope would open up new windows on the Universe, and we hoped that it would be able to measure the expansion rate of the Universe. It indeed accomplished this, but many of its biggest discoveries, like the evolution of galaxies over the lifetime of the Universe and numerous lines of evidence for Dark Energy, were either vague hopes or completely unexpected results.

In other cases, we know going into an experiment that, if it works as we hope (always a big if, especially when space flight is involved!), we will learn something fundamental about our Universe. The COBE satellite, the first mission to measure the ripples in the very early Universe that became galaxies and clusters of galaxies, was one of those missions. If it discovered the ripples, it would both further support the Big Bang theory, and the strength of those ripples would be important input for our models of the Universe. If it failed to discover those ripples, then the Big Bang theory would have been greatly challenged, if not invalidated. COBE did discover those ripples, and the chief scientists got a Nobel Prize in 2006 for their work.

Assuming the launch schedule doesn't slip, this Friday night another such satellite is going to launch. NASA's Kepler Mission is a satellite that has one primary purpose in life: to stare at a single patch of sky in the constellation Cygnus for over three years and to find Earth-sized planets in Earth-like orbits around other stars. If Kepler finds a lot of these planets (and I think that most astronomers expect this result), then we would know that planets similar to the Earth (at least in size) are very common in our galaxy, which increases the likelihood that there are many habitable planets in our galaxy. And if Kepler doesn't find very many Earth-sized planets in Earth-like orbits, we will know that our home planet is a very unique place, which could mean that we are one of the few habitable planets around. Either way, the results of this experiment will have an important impact on our understanding of planets and our outlook for finding other life in the Universe.

We've already detected big planets this way from the ground; many planets around other stars with sizes between that of Neptune and Jupiter have been found this way. But we don't think that life can exist on planets this big. Further, most of these planets are really close to their parent stars and have temperatures of a few thousand degrees -- hot enough to melt rock! That's not a promising place to look for life.

So, the Kepler Mission is looking for planets the size of the Earth that orbit stars like the sun about once a year. Think about how technically challenging this is: the Kepler scientists are trying to measure a change of one-ten thousandth in the brightness of a star that happens for a few hours once a year. And then we have to see it happen twice more to verify that the transit repeats with the regularity that planetary orbits require.

The Kepler Mission will last for at least three and a half years, and it will take some time for results to be confirmed. The data taking is hard, the analysis is hard, and we just have to be patient to see multiple orbits of an Earth-like planet. As long as Kepler works as advertised, though, in a few years we will know how common Earth-sized planets are. Right now, we can only guess. And that single result will have a big impact on how we view our Solar System and our home planet, and our place in this vast Universe.

(Yes, Kepler will do other good science, too. But its ultimate success or failure will hinge on its ability to tell us how many Earth-size planets there are in the galaxy.)

Posted by Professor Astronomy at 21:21