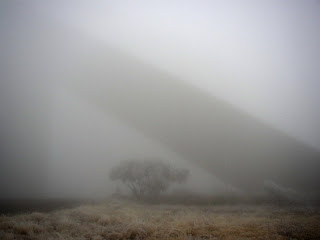 Clouds are the bane of the ground-based astronomer. The picture above is of the Kitt Peak McMath-Pierce Solar Telescope during an ice fog in January 2004. I was supposed to be observing that night on the Mayall Telescope, and the next, and the night thereafter. Needless to say, we didn't get much observing done. (It did finally clear off for our last night, but it was a long wait in the cold and damp weather.)

Today, it is raining here in Austin. It's our first substantial rain since last fall, and we desperately need the rain to quench a devastating drought in the region. But it is dreary and cloudy. This morning several students were complaining about the rain, and though I found the gray skies depressing, I am very happy to see the rain.

My point is that, on the Earth, clouds can both hide what we'd like to see (the sky and sun) and yet be beneficial (by bringing water). Since we can't have our clouds and see through them, too, we astronomers have learned to deal, such as by patience, using other wavelengths of light, or going above the clouds.

As we search for signs of life on other planets, such as the Earth-like planets that the Kepler mission may find, clouds may pose a challenge. Presumably any surface-dwelling, land-based life on other planets (like alien trees and alien intelligent dinosaurs) will rely on weather similar to that on Earth. But what if the clouds are hiding the surface? Some of the primary biomarkers that astronomers hope to look for, like chlorophyll, would be hidden. Others, like ozone, might well be visible above clouds.

Clouds are hard to model. We understand why they form in atmospheres, but we are surprised by the variety of clouds that we see. On the Earth, cloudiness varies by both location and time, and where there are clouds, there are many different varieties. From many light-years away, though, this wouldn't matter. Aliens looking at the Earth would get occasional glimpses of vegetation through holes in the clouds, and should be able to detect biomarkers.

But other planets and moons in our Solar System would be tougher nuts to crack. Mars is almost (but not quite!) cloud free, and we still argue as to whether life might exist on Mars. Venus is a lot like Earth in size and composition, but it is completely shrouded in clouds. Venus is also likely devoid of life, since its clouds are made of sulfuric acid and the surface is hot enough to melt lead. Saturn's moon Titan has some clouds that come and go, but those clouds are difficult to see under a layer of thick haze and smog. Jupiter has clouds of all shapes, colors, and sizes, but we don't know what many of these clouds (like the Great Red Spot) are made out of! Given this variety in our own Solar System, we can only imagine what clouds may cover an alien planet.

Beyond planets, even some stars (well, okay, "failed" stars) have clouds. At least some brown dwarfs have clouds, and those clouds may even be changing over time. Now that we are finally able to predict weather on Earth reasonably well, we have to start worrying about weather on other planets. Gosh, what bad luck would it be if I were to use Hubble to look at planet Vulcan during a planet-wide dust storm?

Posted by Professor Astronomy at 21:25