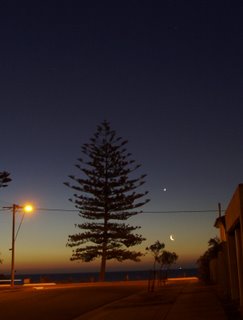 The Moon and Venus setting into the sea on the evening of March 21, 2007. Click on the image to go to its original posting, where you can view a short movie of the setting pair. Image Credit: Ian Musgrave

I'm going to go out on a limb and predict that there will be a marked rise in the number of reported UFOs in the coming few months, at least in the northern hemisphere. It's not spring break for extraterrestrials, nor is it easier to see alien spaceships in that crisp March air. My prediction is based on the positions of two fully identified objects, the planet Venus and the star Sirius, which are the two objects most commonly mistaken for UFOs in the sky.

If you are out in the evening right now, the planet Venus is by far the brightest "star" in the sky. Venus is speeding around the sun, and in late March it will overtake the Earth, passing between the Earth and the sun. As Venus laps our planet in our perpetual races around the sun, it will appear to dive lower in the evening sky, finally disappearing and reappearing just days later in the morning sky.

When high in the sky, Venus shines very steadily, without twinkling like the other stars (here's why). But as Venus gets lower in the sky, its light has to pass through more and more of Earth's atmosphere. And, in the spring, the atmosphere tends to be more turbulent, as weather systems cross the continent and warm air and cold air collide. So, when low in the sky in the spring, even Venus can twinkle. And not only can it twinkle, but it can appear to rapidly change colors, because that same turbulent air bends affects different colors of light differently. So, instead of being a steady beacon in the night sky, Venus at times can appear to be a bright, color-changing point hanging low over the western horizon, slowly sinking toward the Earth. (If you click on the picture above, you can see a movie that shows the moon and Venus setting off the coast of Australia in 2007.)

Over the following couple of months, in April and early May, the star Sirius (the Dog Star, the brightest true star in the sky besides the sun, and also very high and bright in the sky right now) will perform a similar feat, as Earth's orbit appears to carry the sun between us and Sirius. Being a star, Sirius is even more apt to twinkle and flicker colors than Venus, and after Venus leaves the evening sky, Sirius will be the brightest object in the early evening sky.

One April, when I was working on my doctorate degree at UC Santa Cruz, I once received a telephone call from a local television station. They claimed to have video of a UFO disappearing into the Pacific Ocean, and they wanted me to watch the video and tell them what if was. I asked a few questions about precisely where and when the video was taken, what direction the camera was pointed, and how long it took the UFO to set. Thankfully, the reporters had all of that information. While we were talking on the phone, I pulled up some planetarium software, entered the relevant positions and times, and found that Sirius was setting in the western sky at precisely the same time and location. I didn't need to see the video (though I offered to watch it), because the identity of the UFO was painfully obvious. And the television crew was disappointed, but hopefully they learned a little something about astronomy.

There's one other reason that I think that UFO reports will go up over the spring. In addition to two bright objects both being low in the sky (and appearing to land as Earth's rotation causes the star and planet to set), and in addition to the fickle weather that can really beef up atmospheric turbulence (and so, on occasion, cause excessive twinkling and flickering colors), as the northern spring sets in, more people will be outside in the early evening, especially on the rare warm evenings (usually right before a storm front comes through, meaning that the atmosphere will be all the more turbulent). More people outside means more people likely to spy Venus and Sirius and not know what they are looking at.

In short, if you see a rapidly flashing and color-changing light low in the western sky this spring, you're not seeing an alien heading to spring break at Daytona Beach. You're probably seeing Venus or Sirius.

What should you do when you see something interesting in the sky and you don't know what it is? First, make a careful note of the current time, where you are, and what direction you are looking. You need to know these fairly precisely; "kinda toward the south" isn't good enough, but "south-south east" probably is. Second, go look at some planetarium software. There are many good free and commercial bits of software out there, and a lot of people I know use Stellarium, which is free. I don't know what the best software is; most of you wouldn't want to use my favorite software, because it is more complicated and would give you far more information than anyone but the most serious observer would want. Enter the specifics about where you were looking, the time and date, and then see if anything bright was around at that time. If you don't see anything obvious there, you may very well have seen a satellite. Go to heavens-above.com, which has a very large (but not complete!) listing of satellites and when they will be visible from your location. Again, with your location, precise time, and direction of observation, you may discover that you saw a satellite instead.

So, in short, if you hear a lot more about UFOs in the coming few months, remember that there's likely to be a rise in the number of false reports. Instead of packing up and heading for the hills, blame Venus and Sirius, and remember that I predicted it.

Posted by Professor Astronomy at 08:46