What was tops in the last century of astronomy and physics? 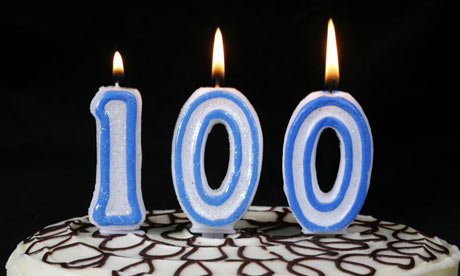 Yesterday, I was asked a simple-sounding question, "What do you think has been the biggest discovery in astronomy or physics of the last 100 years?" With no time to think hard about an answer, I dove in and gave the answer below. But, the more I think about it, the more I like my answer, despite the fact that it was, in some ways, a cop-out.

A lot of big discoveries have been made in the past 100 years. At the start of 1909, we knew about Einstein's theory of special relativity, but general relativity was still 7 years away. We knew that we were just one star in a larger galaxy, but we didn't know how large. We didn't even know that other galaxies existed. The Bohr model of the atom (where electrons went around a nucleus but could only be in very specific orbits) was still four years away; the quantum physics that underlies most all modern physics would not appear for 15 years. We didn't know that the Universe was expanding, and we certainly didn't know how old it was. Dark matter and dark energy hadn't even entered the minds of people yet. So, which of these do I think was the most important discovery?

My answer is that no single astronomical or physics discovery of the past century was most important. Many of the discoveries were intricately interwoven. I think it is the sum total of many of these discoveries, which led to what is virtually a second Copernican Revolution (¡Viva la Revolución!).

The Copernican revolution was many things, primarily the realization that the Earth was not the center of the Universe, but was one of the planets orbiting the sun. Philosophically, the Copernican revolution removed humans from being the center of everything, and reduced us to co-inhabitants of just another planet. Since we all live in a time when this is accepted, it's hard to realize the enormous impact of this discovery on not just science, but society.

At the start of the 20th century, we realized that not only was the Earth just one of many planets, but we also knew that the sun was just one of many stars. But our universe was still a kinda small place. Our Universe was a collection of stars and nebulae, probably no more than a few thousand light-years across, and our sun seemed to be relatively near the center of that.

Today, thanks to the contributions of many astronomers, physicists, and through rapidly evolving technology, we realize that we live on the outskirts of the Milky Way galaxy, which itself is only one of billions of galaxies in an expanding and evolving Universe that is at least 14 billion light-years across, and perhaps far bigger. Instead of being near the center of a small universe, we humans have been relegated once again to just being a tiny, typical part of something much vaster than we can comprehend.

So, I would claim that this realization, that we live in a gargantuan and dynamic Universe, is the most important discovery of astronomy in the past 100 years. This discovery was not made by any one person, but has emerged from the discoveries of many astronomers and physicists. This realization has not just required looking through telescopes at distant things, but also rests on our understanding of subatomic particles and the structures and interactions of atoms.

Like a 10,000 piece jigsaw puzzle, it is not until we put all the pieces in place that we start to see the whole picture. And that is why I think no one scientific discovery is bigger than all the rest. In order to understand our home Universe, we have to fit lots of pieces, some big, some small, together. The fact that we've been able to piece this together in only 100 years is quite astounding.

Posted by Professor Astronomy at 12:59