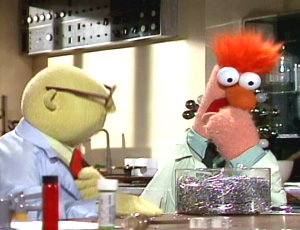 The state of Texas is in the early stages of revising its science education standards (the science portion of the Texas Essential Knowledge and Skills). This promises to be a very contentious process, as several competing groups are gearing up for a big fight.

If you are not a citizen of Texas, why should you care what happens here? First, Texas is one of the largest markets for textbooks in the country, so Texas state educational standards influence the content of textbooks (and not just science, but every subject!). Second, the issues that are being argued over in Texas are very likely to come up in discussions over your home state's educational standards (assuming you are a US citizen), if they haven't already. Last, science and technology have been a crucial part of America's continued influence in the modern world. If we do not continue to hold ourselves to the highest standards, we will lose initiative and influence in the world at large.

I'll be blogging about many of these issues in the next several posts. But let's start with what you think would be an easy question, though it's really the heart of the entire conflict: What Is Science?

Part of the problem is that the definition of the word "science" isn't, well, all that scientific. To some people, "science" is a collection of subjects: physics, chemistry, geology, astronomy, etc. But why is astronomy considered "science," while English, philosophy and history are not?

Science is more than a list of subjects. It is also a process, and a very specific process at that. The scientific process is a method for explaining natural occurrences as a set of testable theories. Every scientific theory must make predictions that, if they don't come true, prove the theory is wrong. If a theory cannot make a such a prediction, it is not a scientific theory, even if the theory is about a topic most of us would call "science."

For example, let's say that I go outside and drop a hammer and a feather. The hammer plummets to the ground, while the feather lazily wafts downward. Now, I board a plane to France, and I repeat the experiment. I drop a hammer and a feather, and the hammer drops quickly to the ground, while the feather slowly floats downward. I then get back on a plane and fly to Australia, and I repeat the experiment again. Once more, the hammer hits the ground first, followed by the feather. So, being a clever person, I come up with the idea that "heavier objects fall faster."

Now, suppose that I claim that the results of the experiment can be explained due to an undetectable substance called plumatardium. In my hypothesis, plumatardium causes feathers to fall more slowly than other objects, but plumatardium has absolutely no other effect on anything. Further, I claim that the presence of plumatardium in the Universe is random; there's no way to know if it exists on a given planet unless you compare the rates at which hammers and feathers fall.

My hypothesis, while it may sound scientific, would not be considered a scientific idea. This is because it cannot be falsified; I claim the only way to detect it is to drop a feather and see if it falls slowly, and that its only effect is to cause feathers to fall slowly. There is no way to prove that plumatardium doesn't exist --if you were to run the feather test on a random planet, and the feather fell at the same rate as the hammer, I could just claim that the particular planet has no plumatardium. Notice that my hypothesis could well be correct -- there's just absolutely no way to test it, so it is not a scientific hypothesis! No scientist would even consider my Plumatardium Hypothesis unless I could develop a test to see if plumatardium exists. So, though it might sound scientific, my plumatardium idea isn't scientific, and it wouldn't belong in a science classroom.

I'm not saying that there is necessarily anything wrong with non-scientific pursuits. For example, consider music, a big hobby at mind. At its most fundamental, music is what we perceive due to vibrations travelling through the air (That is physics!) You can even take classes in music theory (that sounds sciency!). But no matter how many physicists work on the problem, Mozart's composing of the "Magic Flute" is not a fundamental law of nature. Neither could music theory (or any theory) predict the British Invasion. Just because Mozart and the Beatles aren't scientific, though, doesn't mean that studies of classical music or Sgt. Pepper are not valid pursuits. Those studies just don't belong in a science classroom; there are more appropriate venues (like a music studio or even a social studies classroom).

Where I would claim things go wrong is if I blatantly ignore or misuse the scientific process. Again, go back to my plumatardium hypothesis. Suppose someone asks me why I do not think that air resistance is the answer, that the flow of billions of trillions of air molecules over and through the many nooks and crannies of the porous design of the feather prevents the feather from accelerating as fast as the smooth and dense hammer. I reply, "No one can calculate the trajectory of every single molecule around the feather, therefore the air resistance theory is unscientific, too!"

While it may be true that no person, nor any existing supercomputer can follow the path of every single air molecule, nor even a tiny fraction of the air molecules, I would be ignoring centuries of scientific experiment and theoretical works on wind resistance. Simply because we do not know the exact details of how wind resistance works on an atomic level does not mean that wind resistance is an invalid theory. Incomplete, perhaps, but not invalid. Don;t throw out the baby with the bathwater!

Or, suppose I were to argue that because we cannot yet determine air flows on a molecular level for a system involving trillions upon trillions of particles, that plumatardium must exist, as there is no other explanation for the feather dropping more slowly than the hammer. Again, even if the molecular theory of wind resistance is wrong, this does not prove that plumatardium exists. My hypothesis would still lack a test that would show whether or not my proposed substance exists. My hypothesis is still no more scientific then it was.

So, in summary, science is not a list of topics; it is a rigorous process for exploring the Universe around us. Some topics can sound like science, but still be non-scientific. And non-scientific things aren't inherently bad or wrong; they just aren't science. What is bad and wrong is bring ignorant (or willfully ignoring) the scientific method while still claiming it is science.

Hopefully all of this up to now doesn't seem too controversial. In my next post, that'll change, but all of my future arguments are based on the points I've made here.