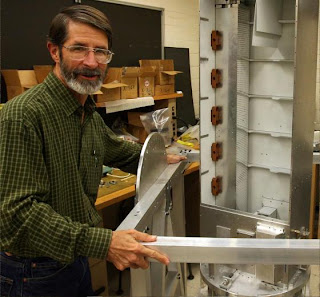 There are times when people like to vilify scientists. It seems that, half the time, James Bond is battling some crazed scientist for control of the world. Most science fiction movies have a mad scientist. Jurassic Park, has several unprincipled scientists. When the Large Hadron Collider started up, I got sick of people (most of whom probably thought they were being both clever and original, when they were neither) quoting Jeff Goldblum's character from that movie, "Your scientists were so preoccupied with whether or not they could, they didn't stop to think if they should."

Hey, I love a good fiction piece, and I love Jurassic Park (book and movie). But I get tired of people who think that scientists are unprincipled, power-hungry megalomaniacs. Many of the most principled people I know are scientists. And today I can present a good example of such an ethical scientists: Texas's own Professor John Lacy.

In a story that appeared in Sunday's Austin American-Statesman newspaper, it was revealed that Professor Lacy quit working on a major NASA project, the SOFIA telescope, because of his personal concerns about the environmental impact of the telescope. Professor Lacy is a very soft-spoken, intelligent scientist, not an environmental nut, nor an attention-seeking egomaniac. He quit the project out of genuine concern, and didn't make a big deal out of it; the news article was written by a student who caught wind of the story.

SOFIA is an infrared telescope. It is very hard to do infrared astronomy from the ground, because water in Earth's atmosphere blocks infrared light. So, you either need to launch a telescope into space (which costs billions of dollars) or put it on an airplane and fly above most of the atmosphere's water. SOFIA obviously chose this latter approach.

SOFIA is being assembled on a converted 747 jet. When it becomes operational, it will fly a few times a week, using an entire plane load of jet fuel each flight. If you work out how much fuel SOFIA will use, each flight is only about one ten-thousandth of the USA's daily jet fuel usage, a tiny percentage. But it still adds up to 3+ tons of CO2 emitted per flight.

The ethical question is, therefore, "Is that worth it?" If the benefit from the telescope were very high, and SOFIA contributes greatly to astronomy, then that cost may well be worth it. When Professor Lacy thought through the issue, he decided that the scientific payoffs of SOFIA were not worth the environmental costs. So, after much deliberation, he quit the project.

Obviously, not all astronomers agree with him. Personally, I don't know if I would come to the same conclusion. And, I doubt there is a "right" or "wrong" answer on this particular issue. All astronomy, in some way, has a significant carbon footprint. We travel to observatories, our computers use electricity, our journals use trees. But we do more than contribute to the problem; we contribute to the solution. It was astronomers trying to understand why Venus is so hot and why the Earth isn't frozen solid that lead to the discovery of the greenhouse effect. It is astronomers who have proven that the recent rise in global temperatures is not due to increasing energy output from the sun. And by keeping people interested in science, we astronomers can help people feel more a part of the fragile world in which we live, which leads people to be receptive to solutions to the greenhouse crisis.

So, I don't know that I would have made the same choice as Professor Lacy. But I do know that to walk away from a project that one has worked on for a significant fraction of one's career takes strong personal morals, courage and conviction, those very properties that movies and some elements of society often claim we scientists don't have. So, the next time you hear someone saying how scientists only have their own personal interests at heart, think about John Lacy and the SOFIA telescope. We do consider the impact and implications of what we do.

Posted by Professor Astronomy at 15:51