Hubble sees a planet around another star 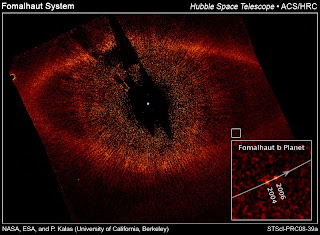 In the fall, low in the southern sky hangs a lone bright star named Fomalhaut. Other than being one of the brighter stars in the sky and being relatively nearby (about 25 light-years away), Fomalhaut remained fairly obscure for most people until the 1980s. That's when a NASA infrared satellite called IRAS discovered that Fomalhaut had a lot of extra infrared light that could be explained by a lot of dust around the star, dust that could be explained by a forming planetary system. In 2005, the Hubble Space Telescope took a picture of this dust, and it looked like almost a perfect ring. Except that the ring was not exactly centered on the star, like you would expect -- it was offset a little bit. The team taking the Hubble picture suggested that a planet's gravity could be pulling the ring off-center, and astronomer Alice Quillen calculated that this planet could be as small as Neptune. But the planet remained hidden.

In a paper accepted to the prestigious journal Science, astronomer Paul Kalas, who had taken the first Hubble picture of Fomalhaut, announces that a second Hubble picture (above) has revealed a planet about twice the size of Jupiter orbiting Fomalhaut. In the picture above, the box shows a blow-up of the same portion of the old and the new images, and a tiny dot of light is seen to have moved a tiny bit in the same direction as the ring, just what one would expect for a planet orbiting the star!

Not shown is the more important bit of information for us astronomers, that the ring and the dot are both following Fomalhaut through the sky. All stars move in the sky as our Solar System and the stars move relative to one another. Fomalhaut moves at a fairly high rate, so that accurate pictures taken a few years apart can show its motion. A few other dots in the Hubble image didn't move with Fomalhaut, indicating that they aren't related -- they are just other stars in the distance. But since the ring and the planet, now called Fomalhaut b, moved with Fomalhaut, we know that they are all related. Past claims of pictures of planets around other stars proved to be premature, as later pictures showed them not to be moving with their purported parent across the sky; Fomalhaut b does not have this problem.

Based on the pictures and how far the planet moved in its orbit, and based on new models of the ring by team member Eugene Chiang, Paul Kalas's team estimates that the planet is about twice the mass of Jupiter, and located 115 times further from Fomalhaut than the Earth-sun distance, or about 10.7 billion miles away. It takes this planet almost 900 Earth-years to orbit Fomalhaut once.

There are many head-scratching things about this planet. First, how could such a big planet form so far away from the star? We didn't think that was possible, so maybe the planet moved out from closer to the star (this happened to Neptune and Uranus in our Solar System), or maybe it formed out there, showing we don't understand planets. Fomalhaut b is also about 100 times brighter in visible light than models predict for a planet of its size. Maybe Fomalhaut b has a ring around it, like Saturn, or maybe our models of its atmosphere are completely wrong. We have only a very few limits on planetary atmospheres outside our Solar System, so it wouldn't surprise me if these models are just plain wrong.. Also, Fomalhaut b's brightness changed by about 60% in between the two pictures, which could mean that any ring around the planet is changing fast, or perhaps that the weather on the planet is rapidly changing, or perhaps that there is a variable amount of dust and rock blocking some of the planet's light. There's obviously still a lot of work to be done here!

To me, the most amazing part of this discovery is the technical aspect. Fomalhaut b is one billion times fainter than Fomalhaut, and it is located just 15 arcseconds (or four thousandths of a degree) away from the star. This is roughly like trying to find a single lightning bug four feet away from a collection of 150 searchlights from ten miles away. That ain't easy. And that's the power of the Hubble Space Telescope.

Congratulations to Paul Kalas and his collaborators on their discovery!

Posted by Professor Astronomy at 13:30