We underestimated the power of the Dark Side 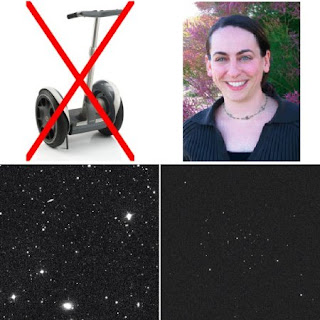 But light isn't everything. We have known for some time that a lot of small galaxies seem to be made of a lot of dark matter. We know this from measuring the speed with which stars move through a galaxy; this speed is closely related to how strong the pull of gravity is, and the pull of gravity is directly related to how much matter there is. If we measure the speed of stars, we can get how much matter is there.

A team of astronomers headed by one of my grad school classmates, Marla Geha (that's her picture up above), went to the Keck Observatory and measured how fast the stars in the direction of Segue 1 were moving. First, they found that most of the stars in that direction are not related to Segue 1. This was an important finding. The lower-right picture above is really just a map of the stars that Marla and her collaborators found to be true members of Segue 1. With that picture, you can see that Segue 1 kinda looks like a typical dwarf galaxy -- scattered stars, concentrated toward the middle, oval-shaped, and faint (which we already new).

This finding also disproved one theory that Segue 1 was a clump of stars that had been ripped out of the Sagittarius Dwarf Galaxy, a moderate-sized galaxy that our big Milky Way is currently shredding apart. Streams of stars ripped from the Sagittarius dwarf galaxy cross the entire sky. We know they come from the Sagittarius Dwarf because they all move in the same direction in the dwarf galaxy's orbit, like marathon runners that are falling behind the main pack. The stars in Segue 1 are moving in a different direction, so we now know for certain that this is its own galaxy.

When Marla Geha's team measured the speed of the stars in Segue 1, they found that the stars were moving about with speeds of around 4 kilometers per second (2.5 miles per second). This is very pokey by astronomy terms; stars in big galaxies move 50 times faster than this. It's even slower than the star speeds in globular star clusters, tight conglomerations of hundreds of thousands of stars that are part of the Milky Way galaxy. So, some thought that Segue 1 must just be a wimpy globular cluster.

However, Geha's team next determined how much matter was needed to make enough gravity to move the stars around at these speeds. The answer was about 450,000 times the mass of the sun. This is still not very much matter, by astronomical standards. But look more closely at the numbers. The galaxy is only 350 times brighter than the sun, but is 450,000 times more massive than the sun!

Astronomers like to use a measure called the "mass-to-light" ratio. This is simply how much matter there is in a group of stars divided by the total amount of light from the group of stars. By definition, the sun has a mass-to-light ratio of 1: it has the mass of one sun divided by the light of one sun. (Even I can do that math.) Let's look at globular clusters. The globular cluster Omega Centauri is about 1.2 million times brighter than the sun, and its mass (measured from the speed at which its stars are moving due to gravity) is about 2.5 million times the mass of the sun. So, Omega Centauri's mass-to-light ratio is 2.5 million / 1.2 million = about 2. In other words, Omega Centauri has about two Sun's worth of matter for every single Sun's worth of light it puts out. That's to be expected, because globular clusters are mainly made out of lots of stars that are a little bit less massive than the sun but a lot fainter. (A star with 80% the mass of the sun puts out only about 1/4th the light of the sun.) Most star clusters and bright galaxies have mass-to-light ratios between 1 and 10; these ratios can be explained by different mixtures of normal stars and gas.

Okay, so let's move way out and look at clusters of galaxies. These clusters can contain tens or hundreds of galaxies the size of the Milky Way. All of the light in a big cluster of galaxies adds up to about 1 trillion times that of the sun. But when we measure the amount of matter due to gravity, we get one hundred trillion times the mass of the sun. So the mass-to-light ratio of a cluster of galaxies is 100 trillion / 1 trillion = 100. That's ten times bigger than we can explain by adding up all of the mass of stars and dust and gas and other "normal" matter. Some other type of matter that we can't see has to be there -- we call this matter "dark" matter. We think that about 80% of the matter in the Universe is dark matter and about 20% is normal matter (a note for you purists out there, I'm excluding dark energy here.

We think that most of the Universe started off with a pretty standard mix of 80% dark matter and 20% normal matter. How did Segue 1 lose so much of its normal matter?

We think there are many reasons Segue 1 lost its ordinary matter, but probably the most important reason is something called "supernova blowout." When galaxies form stars, they make a wide range of stars. A bit of star formation will get you a lot of tiny red dwarf stars, several sun-like stars, and a few whopping big stars. You'll also have a lot of leftover gas that didn't go into making stars. In a normal galaxy, like the Milky Way, that gas is used over the ensuing billions of years to continually make new stars.

Big stars live fast and furious lives, ending in tremendous supernova explosions. In these explosions, huge blast waves are sent into space. These blast waves sweep up a lot of the gas and accelerate it outwards at tremendous speeds, perhaps tens or hundreds of kilometers per second.

Now remember, the stars in Segue 1 move about due to gravity at a measly 4 kilometers a second. If they were moving much faster, gravity wouldn't be able to hold onto them. So, imagine what happens to the poor galaxy when, shortly after spending a lot of effort to make a few big stars, those stars explode. The blast waves accelerate all of Segue 1's gas to speeds ten times faster than gravity can hold on to. Whoosh! The gas is gone forever. No more star formation. And, since Segue 1 hadn't had much time to make a lot of stars yet, most of its normal matter is in the form of gas. All gone, forever.

By the time you get to big galaxies, like the Milky Way, the supernova blast waves are moving slower than the galaxy's escape speed, so the Milky Way can hold onto all of its gas and make stars constantly for billions of years. So the Milky Way still has a pretty normal ratio of normal and dark matter. And, for galaxies with masses in between that of Segue 1 and the Milky Way, the supernova blast waves are strong enough to push the gas around quite a bit, but not get rid of it all together. When we look at these galaxies, we see that they tend to make stars in little bursts. They'll make some stars, the supernovae go off and push the gas around, causing the star formation to stop. But, over time, gravity can pull the gas back in and make another burst of stars, more supernovae happen, and the gas gets pushed out again, only to eventually be brought back in to make yet more stars.

In short, Segue 1 is a really cool galaxy. Marla Geha's team has made some extraordinary discoveries about Segue 1, showing us how close this galaxy is to not existing at all. Congrats!

Posted by Professor Astronomy at 17:19